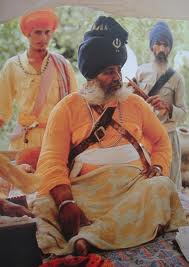 Akali Baba Santa Singh Nihung was commander-in-chief of Budha Dal. Born as Pashora Singh in 1928 A.D., in Gujranwala now modern day Pakistan, he was bestowed with the nomenclature Santa Singh in 1935 A.D. via the grace of the 'Budha-Dal' warriors under whose gaze he underwent the Khalsa initiation. He rejuvenated many an Akali tradition and whose effect is still being felt by the panth. he became famed for his divergent courses in many a panthic affair, and his anathema to the restrictive and often damaging policies of the SGPC and the Akali Dal. Blessed with an ever-growing spirit and emboldened by the Khalsa's history, the young Santa Singh dedicated himself to the various services required in the 'Budha-Dal' and was extensively blessed by his contemporary commander-in-chief, Baba Sahib Singh Kaladhari. Under the command of Baba Chet Singh, he undertook the dual services of preparing 'Sukh-Nidhan' the medicinal beverage favored by the Akalis, and langar, the communal eatery. Under the mystical tutelage of Baba Mitt Singh, the young Santa Singh mastered an extensive portion of the Khalsa's ethos and was prophecised to become an extensive bulwark of the panth by Baba Dharam Singh Ji. Subsequently the young Santa Singh adopted the nomadic lifestyle of a hermit and after travelling an extensive portion of the sub-continent found temporary residence at Gurudwara Damdama Sahib Cheeman Patshah, commemorating the temporary reprieve of Guru Hargobind Sahib Ji in the region, in 1955 A.D. It was here that his fame spread far and wide with thousands gathering to hear his spiritual and temporal discourses on Gurbani, and the Khalsa panth, with thousands more attending conferences declared at his behest. Ultimately his popularity soon catalyzed in him becoming the residential preacher of the Malwa region of Punjab, with thousands receiving initiation into the Khalsa via his hand in Ludhiana and Patiala.

An extensive master of 'Shastar-Vidya' the science of weaponry, his martial engagements and exhibitions soon saw him become an unparalleled master of combat in Punjab. An incident is recounted even to this day in Punjab, where he cracked the skull of an Islamic zealot who challenged the 'Budha-Dal' warriors to combat via staves. Perpetually adorned with weapons, and a physical Hercules, he represented a formidable image to both friend and foe alike. Before his demise, Baba Sahib Singh Kaladhari's successor, Baba Chet Singh declared Santa Singh as his successor in 1969 A.D.This decision was highly applauded by the latter's companions who with the blessings of Guru Granth Sahib Ji gave Baba Santa Singh the turban of the 'Budha-Dal' legion on May 8th during Dusshera at Gurudwara Damdama Sahib, Sabo Ki Talwandi. One of the bulwarks of the Akali legions. Under the latter's command the 'Budha-Dal' subsequently expanded into the entity which it had once been before the arrival of the British. It gained access to extensive portions of land and commenced a rejuvenation which had been thought impossible. Simultaneously this new-found chapter in the legion's history soon saw it's ranks swell until ultimately it became a reflection of it's prior historic self. A scholar of the highest quality the Baba commenced a strict regimen of providing verbal discourses from Siri Guru Granth Sahib Ji, Dasam Granth, Sarbloh Granth and the historic Granths in a vein similar to Kavi Santokh Singh's Suraj Prakash, and Bhangu's Sri Gur Panth Prakash. Noticing the deficiency of Khalsa related literature for the educated masses, the Baba purchased a printing press at Anandpur Sahib and commenced the publishing of various Khalsa-related literature. It was only due to his Herculean efforts that the Sarbloh Granth was re-ingrained in the panth's psyche after an extensive absence, he gained access to Udasi Harnam Dass's transliteration of the said scripture and had it disseminated universally.

Realizing the commercialization of martial arts, and it's negative precepts, he commenced the construction of an arms factory at Patiala, which still continues to construct high quality weapons for the Akali-Nihungs even today. With the commencement of the mass unity of various panthic factions by Sant Jarnail Singh Khalsa Bhindranwale, the Akali Dal commenced to rankle in the Baba's eyes. Not forgetting the latter institution's role in plaguing the Akali-Nihungs during the British period, the Baba refused to join the Sant and his fellow Akali legions in their crusade against the Indian polity. After the horrors of Operation Bluestar, the then prime minister, Indra Gandhi and her simultaneous armed forces' ambitions did not bode well with the senoir custodians of Darbar Sahib. The latter wanted an en-masse exit of the armed forces and the Indian state from the damaged precincts of sacred shrine, whereas their opponents wanted to re-build the structure and perpetually veil the signs of deliberate destruction which they had carried out. After the refusal of several eminent Khalsa schools to re-build the damaged darbar Sahib, Baba Santa Singh acquiesced to the government's wishes. Far from healing the tarnished Sikh sentiments, this maneuver served to alienate him from his beloved panth who had him ousted from it's temporal body and declared a non-adherent of the ethos. Subsequently the very polity who requested his aide also betrayed him and decisively moved against him. As a result Baba Santa Singh was left alone to fend of the attacks of an aggrieved panth and a nefarious state.

After the bloody militancy period, the Baba found himself the target of the Akali schemes once again. His own nephew was set up against him as the parallel head of the 'Budha-Dal.' After remonstrating and re-enrolling the latter the Baba commenced an arduous regimen of proselytizing the Khalsa ethos. His educational dictums soon saw a widespread knowledge of Khalsa traditions, and with his forgiveness at Darbar Sahib, he was accepted in many a Khalsa circle. however with the advent of senility on his physical and mental framework he became a pawn in the games of the Punjab polity and with his demise, the latter succeeded in it's nefarious designs. The birth of a parallel 'Budha-Dal' which presently has hijacked a numerous resources of it's authentic counterpart, including the world-renowned 'Budha-Dal' college. The Baba ultimately journeyed to his heavenly abode on May 8th 2008 A.D. Rarely devoid of a rosary he perpetually reiterated the name of God. His analyzations and collections of historic manuscripts is in the process of being published on the internet