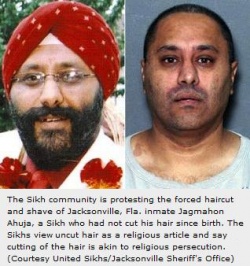 It is against a Sikh's religious practice to cut his or her hair, as kesh (unshorn hair) covered by a dastaar (Sikh turban) is one of five articles of faith which a Sikh must keep at all times. Members of many faiths value keeping long hair or beards including Sikhs, Jews, Muslims, Rastafarians, and Native Americans. Florida prisons do not allow these prisoners to serve their sentences with their faith intact.

"We are writing you on behalf of the undersigned petitioners to immediately stop the repeated egregious and severe violation of the religious tenets of a Sikh prisoner, namely the forcible cutting of his kesh (unshorn hair) and removal of his dastaar (Sikh turban). The prisoner, Jagmohan Singh Ahuja, is currently located at Duval County Jail in Jacksonville, Florida, and is serving a three year sentence for misdemeanor violations.

Jagmohan Singh, who maintained his kesh (unshorn hair) and kept it covered with a dastaar (Sikh turban) prior to becoming incarcerated, went through the severely traumatizing process of having his dearest religious tenets violated when jail staff cut his hair on or about July 1, 2008. As he communicated to UNITED SIKHS, he does not recognize himself anymore, and it brings him constant and great grief. After having fled from religious persecution as a Sikh living under the fanatical Taliban in Afghanistan, Jagmohan has faced religious persecution again in the United States of America, the bastion of religious freedom and civil rights.

Prison staff has already alerted Jagmohan Singh that he will have his hair forcibly cut again within the next few days, and Jagmohan has said that this terrifies him. He sincerely hopes and prays that something will be done to stop this religious persecution.

We request your immediate attention and assistance to stop this egregious conduct. The cutting of Mr. Singh’s hair and removal of his turban has already caused great anguish within the Sikh community, and the repeated violation of Jagmohan’s faith will become the source of great strife within the 25 million members of the Sikh community worldwide and 500,000 Sikhs in the United States. It will also surely be cause of great concern for all peoples concerned with freedom of religion and protection of constitutionally guaranteed rights."

Sikh groups are decrying the treatment of a Florida inmate who was forced into the cutting of his hair, a revered symbol of piety.

The Sikh community is protesting the forced haircut and shave of Jacksonville, Fla. inmate Jagmahon Ahuja, a Sikh who had not cut his hair since birth. The Sikhs view uncut hair as a religious article and say cutting of the hair is akin to religious persecution.

The Florida chapter of the American Civil Liberties Union is considering legal action against the Jacksonville Sheriff's Office, saying that cutting Jagmahon Ahuja's hair after he entered the jail system violated the state's statute on religious freedom.

And for devout Sikhs, Ahuja's haircut represents hundreds of years of persecution.

"It's essentially like saying, 'I don't care about your religion. I don't care about who you are,'" said Rajbir Datta, national director of the Sikh American Legal Defense and Education Fund, which has been following Ahuja's case.

Ahuja, 36, was jailed April 29, charged with a probation violation and an order of protection related to a domestic violence case. He was convicted, sentenced to 714 days in jail and is expected to be released in May 2010, according to the Jacksonville Sheriff's Office's Department of Corrections Web site. Court documents show Ahuja has filed an appeal.

"The ACLU is very concerned about this important issue and would like to be on the forefront of changing Florida's discriminatory policy." - Glenn Katon, Director, Religious Freedom Project for the American Civil Liberties Union in Florida.

UNITED SIKHS is committed to using all avenues to change Florida's discriminatory prison policy for members of all faiths who keep religiously mandated lengthy hair or beards, whether Sikh, Jewish, Muslim, Rastafarian, or Native American. We urge all who value civil liberties to unite in the bid to overturn this discriminatory policy and stop the violation of Jagmohan's religious beliefs. Jagmohan needs your help to continue to increase pressure on the Governor of Florida and Mayor of Jacksonville to change these discriminatory policies.

Join United Sikhs and partnering organizations to stop the violation of religious rights in Florida Jails.

Find out how you can help at: United Sikhs 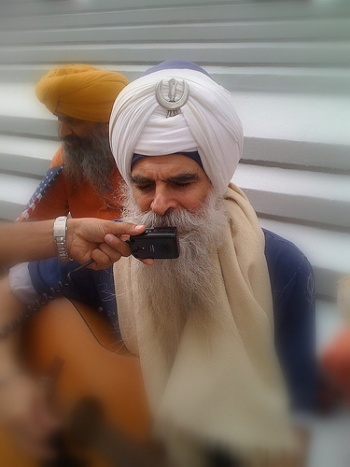