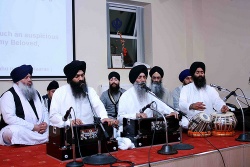 In this Shabad on page 1075 of the Sikh holy Granth, the fifth Sikh master, Guru Arjan Dev tells how important it is to sing Kirtan in this age of Kaljug. Kirtan is the singing of the Lord's praises with the accompaniment of musical instruments.

The Sikhs regard the Guru Granth Sahib as their perpetual spiritual guide. At the same time, it is a holy Scripture for all mankind that embodies the revealed truth applicable to all the human race. The holy Granth enshrines the wisdom of many spiritual masters of the East and is the most recent endeavour to allow us to experience the Divine.

Although Kirtan refers to any singing of the Lord's praise, for the Sikhs, it is the singing of hymns (Shabads) from their holy Scriptures. These hymns or shabads are soaked in deep spirituality and resonate with such divine thoughts as help one to experience His Eternal glory. It connects one to the Divine Intelligence which makes one perceive the noumena behind the phenomena, the Eternal behind the ephemeral.

In the holy presence of Sri Guru Granth Sahib, the ignorant grow in the wisdom of the spirit and feel the presence of God. The message of Guru Granth Sahib is simple, succinct and practical. The scripture has a unique beauty of form, texture and thought. It keeps one’s gaze inward, as one performs the chores of daily life.

To read or recite the hymns of Guru Granth Sahib with unswerving devotion is to be transported to the realm of spiritual ecstasy. Listening to Kirtan, the singing of sacred compositions, to the accompaniment of specified musical instruments, helps in the ascension of the soul to the Supreme Reality. It initiates one into the mystic truth of the Word, and bestows many blessings. Guru Arjan Dev says: "Whosoever listens to or sings the kirtan of Hari, no trouble can come near him" (SGGS p190). It summons the seeker to his original home linking one to the transcendent melody within.

Music is primal emanation of the cosmic energy. It is the easiest way to concentrate the mind on the Divine. The core of music is "Nada", which reverberates in all objects in the world of phenomena. Nada is the originative principle of creation and stands for the first cosmic vibration.

"Nâda" manifests through Râga which has the capacity to engage the listener’s attention through the use of particular notes and the melody. Nâda can fill the human mind with positive feeling. Guru Granth Sahib, repository of the holy shabads, is set in 31 ragas. The sound-body of Shabads, each having a stipulated raga, links one to the music of the spheres. Shabad is infinite energy – the transmutation of the Divine Sound into verbal evidence. Each passage of Guru Granth Sahib is loaded with energy as it comes from the cosmic source which can be felt and experienced during kirtan.

When the voice of the Supreme descends through prophets, saints or holy men, the music of the Word becomes the music of the world and acquires rhythmic expression. The verses of Sri Guru Granth Sahib have a music of their own as these are the divine emanations. Melody, metrical pattern and imagery harmonise in the hymns as do thought, emotion and spirituality. As the Divine Word blends with devotional music it creates a spiritual ambience which beckons the human soul back to the source of existence. Guru Nanak Dev observes in this context:

Kirtan brings one closer to God

During Kirtan, music does not remain a mechanical structure of sounds but becomes a divine way to grasp the Infinite Reality. It reveals the mystery of the Holy Name not through the intellect but through the heart. It checks the ego, the vagaries of the mind and the senses and uplifts the human soul. Says Guru Amar Das:

Sing that which brings God to your mind

Kirtan is not a matter of musical modulations of the voice, but of the spirit The notes are so expressed that the mind is tuned to the Supreme spirit. Says Guru Ram Das:

All other songs, tunes and rhythms are false

Kirtan has no loud, insistent beats – it is not sensational or sensual but soothing and sublime. It is pure and simple in its form. Based on the classical ragas it is least dogmatic and employs minimum embellishments lest the devotional rendering overawes the spirit of the hymns or acquires lurid overtones. Sikh musicology prohibits the clapping of hands, thumping of feet or flinging of limbs during the performance. Guru Nanak Dev cautioned against seeking auditory pleasure by frivolous maladies or acts:

All hopes and desires are fulfilled

During Kirtan, the mind gets absorbed in sublime thoughts and is cut off from wordly objects. The serener the mind the better its capacity to cope with worry, fear, anxiety, and negative emotions. Kirtan subdues the lower impulses and propensities of the instinctive mind, sharpens the perceptive faculty to discriminate between right and wrong and prepares one to align with the cosmic laws. It permeates one’s whole being with divine joy, generates positive energy and has a soothing effect on one’s nerves and feelings. Says Guru Arjan Dev:

Kirtan gives one that rare kind of experience which is far more profound than that of the ordinary consciousness. It pulls the soul upward towards the realms of Being where one may hear the unstruck melody and feel the electrical impulse of heavenly strains of the Sound Current.