Heer Ranjha (Punjabi: ਹੀਰ ਰਾਂਝਾ, ۝یر رانجھا, hīr rĝñjhĝ) is one of the four popular tragic romances of the Punjab. The other three are Mirza Sahiba, Sassi Punnun and Sohni Mahiwal. There are several poetic narrations of the story, the most famous being 'Heer' by Waris Shah written in 1766. It tells the story of the love of Heer and her lover Ranjha. The other poetic narrations were written by Damodar Daas, Mukbaz and Ahmed Gujjar among others. 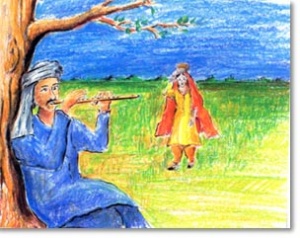 Heer Saleti was an extremely beautiful woman, born into a wealthy Jatt family of the Sayyal clan. Ranjha (his surname), his first name was Dheedo, also was a Jatt. He was the youngest of four brothers and lived in the village 'Takht Hazara' by the river Chenab. Unlike his older brothers who had to toil in the fields, young Ranjha had been doled over by his, becoming his father's favorite son. With the work being handled his father allowed him to lead a life of ease playing the flute ('Wanjhli'/'Bansuri'). After a quarrel with his brothers over land, Ranjha left home.

In Waris Shah's beloved version of the epic, Ranjha left his home because his brothers' wives refused to give him food. Eventually he arrives in Heer's village and falls in deeply in love with her at first sight. Heer offers Ranjha a job as caretaker of her father's cattle. Soon, mesmerised by the way Ranjha plays his flute, she eventually falls in love with him. They met each other secretly for many years until they were caught by Heer's jealous uncle, Kaido, and her parents Chuchak and Malki. So Heer, to save the 'honor' of her family, is forced by her family and the local priest or 'mullah' to marry another (rich, respected, older local man) named Saida Khera who lived in a distant village.

Ranjha is heartbroken. He is left to walk the quiet villages on his own until eventually he meets a 'Jogi' (an ascetic) named Baba Gorakhnath, who happens to be the founder of the "Kanphata" (pierced ear) sect of Yogis. Their meeting was at 'Tilla Jogian' (the 'Hill of Ascetics'), located 50 miles north of the historic town of Bhera, Sargodha District, Punjab, India; which since the farengis (the British) partitioned India (dividing the former kingdom of Maharaja Ranjit Singh) has been part of (Pakistan)). The heart-broken Ranjha decided to become a Jogi, piercing his ears and renouncing the material world. Reciting the name of the Lord, "Alakh Niranjan", as he traveled around the Punjab, he eventually finds the village where he is reunited with Heer.

The two returned to Heer's village, where Heer's parents agreed to their marriage. However, on the wedding day, Heer's jealous uncle Kaido had arranged for one of his servants to lace some sweets, that Ranja had sent to Heer, with a deadly poison, such was his jealousy that he would rather have her die than she her happily married to Ranja. Being told what Heer's uncle had done, Ranjha rushed to save Heer, but he was too late, as several pieces of the Laddu were missing and Heer breath her last just as he arrived. Brokenhearted once again, Ranjha finished the poisoned Laddu (a sweet) laying down to die by her side.

Heer and Ranjha are buried in a Punjabi town called Jhang, Punjab. Lovers and others often pay visits to their mausoleum.

Waris Shah’s composition, the love story of Heer Ranjha takes a pre-eminent place, in what may be called the ‘qissa’ literature of Punjab. It is the story of the youngman and a youngwomen, which did not receive the sanction of society in the shape of marriage, a major theme of literature, music, dance and drama not only in Punjab, but everywhere in the world. Witness Shakespear's Romeo and Juliet. 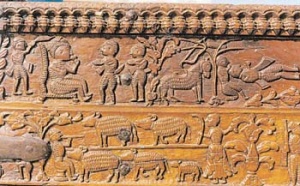 The story performed in the form of an opera as well as a ballet is very typical. Heer was the daughter of a feudal landlord Chuchak Sial from Jhang. Before her sacrifice for Ranjha, she proved herself to be a very courageous and daring young girl. It is said that Sardar (Chief) Noora from the Sambal community, had a really beautiful boat made and appointed a boatman called Luddan. Noora was very ruthless with his employees. Due to the ill treatment one day Luddan ran away with the boat and begged Heer for refuge. Heer gave him moral support as well as shelter.

Sardar Noora was enraged at this incident. He summoned his friends and set off to catch Luddan. Heer collected an army of her friends and confronted Sardar Noora and defeated him. When Heer’s brothers learnt of this incident they told her,"If a mishap had befallen you why didn’t you send for us?" To which Heer replied, "What was the need to send for all of you? Emperor Akbar had not attacked us."

It is the same Heer who, when she is in love with Ranjha, sacrifices her life for him and says, "Saying Ranjha, Ranjha all time I myself have become Ranjha.

No one should call me Heer, call me Dheedho Ranjha."

When Heer’s parents arranged her marriage much against her wishes, with a member of the house of Khaidon, it is Heer who plucks up courage during the wedding ceremony and reprimands the Qazi (priest)."Qazi, I was married in the presence of Nabi (Prophet). When did God give you the authority to perform my marriage ceremony again and annul my first marriage? The tragedy is that people like you are easily bribed to sell their faith and religion. But I will keep my promise till I go to the grave." 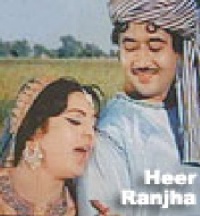 Heer is forcibly married to Khaidon but she cannot forget Ranjha. She sends a message to him. He comes in the garb of a jogi (ascetic) and takes her away. When Heer’s parents hear about the elopement they repent and send for both of them promising to get Heer married to Ranjha. But Heer’s uncle Khaidon betrays them and poisons Heer.

In this love tale Heer and Ranjha do not have the good fortune of making a home. But in the folklore sung by the ladies, Heer and Ranjha always enjoyed a happy married life.

It was Heer’s strong conviction, which has placed this tragic romantic tale on the prestigious pedestal along with Punjab’s religious poetry.