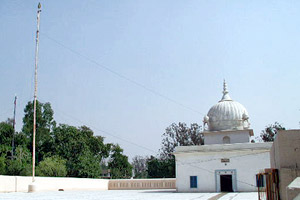 Gurdwara Rakabsar Sahib is located 200 meters east of Gurdwara Tibbi Sahib. According to local tradition, as Guru Gobind Singh Ji came down from the Tibbi and was going to mount his horse, the rakab (stirrup) snapped. Hence the name of the shrine was called Gurdwara Rakabsar Sahib. That separated Rakab is still kept in the Gurdwara.

The birthdays of Guru Nanak Dev Ji, Guru Gobind Singh Ji and shahidi purab of Guru Arjun Dev Ji are celebrated with great fervour here. Besides, the Magh Mela is organized on the 12th and 13th of January to commemorate the sacrifice of the Forty Muktas. Diwali and Baisakhi are also celebrated.

Gurdwara Rakabsar Sahib is located on the outskirts of the city of Muktsar on the Gurharsahai-Muktsar bypass road, opposite Gurdwara Tibbi Sahib. It is three kilometers from Gurdwara Tuti Gandi Sahib