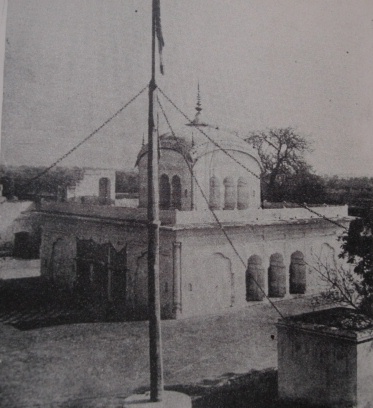 Gurdwara Fatehgarh Sahib is a complex consisting of several important shrines or Gurdwaras linked to the younger sahibzadas (younger sons) of Guru Gobind Singh. It is located about 5 km north of Sirhind (30°37'N, 76°23'E) in a district called Fatehgarh sahib and marks the sad site of the execution in 1705 of the two younger sons of the tenth Sikh master at the behest of Wazir Khan of Kunjpura, the faujdar of Sirhind.

The main entrance to the Gurdwara complex was built by Maharaja Yadvindra Singh of Patiala in 1952. The historical wall, in which the younger sons of Guru Gobind Singh were bricked in, has been preserved in this Gurdwara. The sanctuary containing the historic wall in known as Gurdwara Bhora Sahib.

The place were the three were confined is known as the `THANDA BURJ' (cold tower); built to provide a cool retreat from the summer's heat, it provided only chilling punishment to the Guru's sons and his mother during their imprisonment in the extreme cold. It was in the tower that Mata Gujri collapsed on hearing the news of the martyrdom of her grandsons. Later on, Gurdwara Mata Gujri was constructed at this location to honour Mata ji.

As the Sikhs evacuated Anandpur on the night of 5-6 December 1705, they were closely pursued by the very men who had promised them a safe retreat. Guru Gobind Singh had doubted the promises of those who had laid siege to Anandpur, he had even sent out a series of wagons to test the attackers' promises. The wagons were attacked soon after they had left the safety of the Sikh fortress. It was only after a second promise written on the Qur'an and the Holy vedas of the Hindus, which included a guarantee from Aurangzeb himself, that the Sikhs and his own family members convinced the Guru to leave Anandpur. Hardly had the party reached the ice cold waters of the Rivulet Sarsa then swollen into a raging river by the winter's frigid rains when the attackers fell upon the Sikhs.

Under cover of a quick rearguard action fought on the banks of the river, Guru Gobind Sing and a small band of Sikhs succeeded in crossing safely, but the Guru's family were scattered in the tumult. Guru Gobind Singh's elderly mother, Mata Gujari, and her two grandsons, Zorawar Singh and Fateh Singh, aged 9 and 7 years respectively, had managed to cross the river but they had no where to go until one of the families' cooks, named Gangu, offered to lake them to his own village Khen.

They accompanied him to his house, but he proved deceitful and betrayed them to Jam Khan and Mani Khan of Morinda. The latter at once despatched them to Sirhind where they were consigned to the Thanda Burj (Cold Tower) of the Fort, a place of comfort in the hot summers but terribly cold in the winter months. On 9 December 1705, Zorawar Singh and Fateh Singh were brought before Wazir Khan, who had just returned from the battle of Chamkaur. Wazir Khan tried to lure them to embrace Islam with promises of riches and honours, but they spurned the offer. He threatened them with death as an alternative to their accepting Islam, but they remained firm.

A death sentence was eventually awarded. Nawab Sher Muhammad Khan of Malerkoila protested that it would be improper to harm the innocent children. Wazir Khan, however, ordered them to be bricked up alive in a wall, if they still refused conversion. They were kept in the Cold Tower in that severe winter for another two days. On 11 December they, under the orders of Wazir Khan, began to be walled in with bricks while standing on the ground. However, as the masonry reached above chest height, the wall colapsed. The next day, 12 December 1705, the Sahibzadas were once again offered the choice of conversion or death. 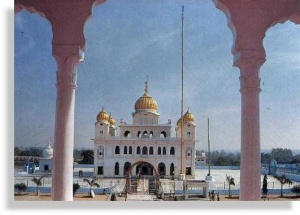 They chose the latter and fearlessly faced the executioner's sword. The cruelty of their murder and their fearlessness of death which they preferred to giving up their faith finds a touching narration in "GarijiShahTdari" an Urdu poem by a Muslim poet, Allahyar Khan Jogi, who used to recite it from Sikh platforms during the second and third decades of the twentieth century. The aged Mata Gujari who had all along been confined in the Cold Tower, only a little distance away, breathed her last as the news reached her ears. The dead bodies were kept for the night at a spot now called Bimangarh, just outside the fort wall, and were cremated the following day by Seth Todar Mall, a wealthy merchant of Sirhind.

Sirhind suffered the full fury of Sikh wrath when Banda Singh Bahadur marched upon it with his daring Khalsa companions. Wazir Khan was killed and the city was occupied on 14 May 1710. Diwan Suchchanand, who had explicitly championed the penalty laid upon the captives by the faujdar, was captured and tortured to death. The town, including the Fort, was razed to the ground. A memorial was raised marking the spot where the Sahibzadas were martyred and named Fatehgarh (Fort of Victory).

Sirhind, however, soon fell back into the hands of the Mughals and was later conquered by Ahmad Shah Durrani who appointed Zain Khan as faujdar in 1761. As Zain Khan was finally defeated and killed in battle on January 1764 by the Dal Khalsa and as Sikhs occupied the country around Sirhind, no Sikh Sardar was willing to keep the accursed town. It was consequently conferred upon Bhai Buddha Singh, a pious and humble Sikh. He later sold it to Baba Ala Singh, founder of the Patiala dynasty.

To honour the memory of the young martyrs, a Gurdwara was constructed on the site of the old memorial and named Fatehgarh Sahib. Maharaja Karam Singh (1798-1845) of Paliala had the Gurudwara rebuilt. He also gave Sirhind Nizamat (district) the name of Fateh Sahib. Other shrines were, in course established around the central Gurdwara. For over a century the management of the shrines at Fatehgarh Sahib remained in the hands of local priests. In 1906, a group consisting of custodians of the the shrines was formed.

In 1944, Paliala ment constituted an Interim Gurdwara and an Improvement Commitee Gurdwaras Fatehgarh Sahib and Joti After the formation of the Patiala a Punjab States Union (PEPSU) inJu the Interim Board was amalgamated Dharam Arth (Religious Endow Board. Upon the unification of PEP East Punjab into a single state of the the gurdwaras in PEPSU passed under control of the Shiromani Gurdwara Parbandhak Committee. Renovate development originally planned by provemcnt Committee of 1944 were l hand in 1955-56. The Gurdwara built My Maharaja Karam Singh of Patiala, In 1844, was replaced by a much bigger and larger building, from about circa 1947-1952. Today the historic wall has been demolished, only some ramparts survive.

The architectural design of the building is Indo-Islamic, with its flai pyramidal construction over a squan ribbed lotus dome on top, mosaic fill a richly patterned ceiling, radiating cusped arches, and projecting win< stands on an extensive mound and coi the landscape for miles around. The storeyed edifice on a raised platform divan hall on the ground floor, with ment below and a central pavilion an on top. The basement called Bhor contains the old brick enclosure bel be the exact site of the execution Sahibzadas. The Guru Granth Sahit cd here with holy relics, hilt of a sw' a dagger and a rust eaten fragment of a double edged weapon. The divan had marble floor and an artistically pz ceiling with the Guru Granth Sahib s the centre in a gilded pdlaki, portab pied seal, on a marble platform. The inverted lotus at the apex of the dome at the pinnacle are covered on the exterior with gold-plated sheets. The dome is topped by an umbrella shaped gold finial as are the domes of the four kiosks located at each corner of the roof. The three storied gateway is topped by decorative canopied pavilions and a clocktower.