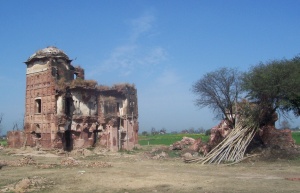 Haveli of Todar Mal, 1 Km away from Gurdwara Fatehgarh Sahib

Diwan Todar Mall was a wealthy Hindu merchant of Sirhind, who on the 13 December 1705 performed the cremation of the three martyred bodies of the two younger sons of Guru Gobind Singh, Zorawar Singh aged about 6, Fateh Singh aged about 9 and their grandmother, Mata Gujari.

This incident occurred after the Sahibzade had been executed by the Mughal authorities on the 12 December 1705 for not renouncing their faith and the death from shock of their grandmother at the news of the sudden and despicable execution of the innocent youngsters. This wealthy merchant had to cover the required ground for cremation with gold coins to get the release of the three bodies. 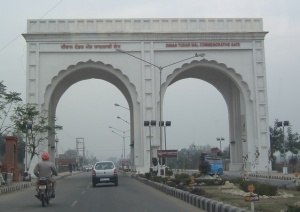 The compassionate Sikh trader of Sirhind, according to tradition, performed the last rites for the two younger sons of Guru Gobind Singh martyred on the orders of Wazir Khan, faujdar of Sirhind, and of Mata Gujari, the Guru's mother. It is said that landowners around the Sirhind Fort would not permit him to hold the cremation in their fields, until one Chaudhari Atta agreed to sell him a plot.

The administrator's stipulation was that the buyer (Todar Mall) will take only as much of the space as he could cover with gold mohars (gold coins), that he would lay out for the purchase. The diwan produced the coins and bought the piece of land he needed for the cremation. It is estimated (see below) that at least 7,800 gold coins were required to buy the required land.

History tells us the Seth ji raised the required number of coins and that he cremated the three bodies and putting the ashes in an urn which he buried in the land he had bought. The site is now marked by Gurdwara Jyoti Saroop at Fatehgarh Sahib, near Sirhind.

Modern historians have tried to identify Seth Todar Mall as a son or later descendant of Raja Todar Mall, of Sirhind, who won renown as an administrator under the Mughal emperors, Shah Jahan and Aurangzeb, and who, according to Shah Nawaz Khan, Ma'asir ulUmara, lived up to 1076 AH/AD 1666. To perpetuate the memory of the noble-minded Seth, a road in Sirhind town and a hall in Gurdwara Fatehgarh Sahib have now been named after him.

The Haveli Todar Mal also known as Jahaz Haveli is situated on the eastern side of Sirhind-Ropar Railway Line just 1 kilometre away from Fatehgarh Sahib. These are the remains of the Haveli of Devan Todar Mal, and a fine building it must have been in its hay day. Todar Mal was a true Sikh of Guru Gobind Singh. In the dark days when Guru Sahib made his way through the jungles of Machhiwara, and his younger sons were put on trial by Zikharia Khan many Sikhs betrayed the Guru.

As the tenth Guru made his way from Machhiwara through to Talwandi Sabo many so called devotees asked Guru to leave their premises as they were in fear that if the authorities were to hear of it then they would be persecuted. But not Todar Mal, he did not shirk his responsibilities, he put the Guru's needs before everything.

With Mata Gujri and the younger sons of the Guru – Baba Zorawar Singh and Baba Fateh Singh – shaheed (martyred) at the tender ages of 6 and 9 the despicable Mughal authorities refused their funeral rites on government land, it was decreed that there funeral rites could only be performed on land bought from Chaudhari Atta. Not only this, but the land could only be bought by laying gold coins (ashrifs) on the required area, possibly vertically.

Todar Mal did not shun his responsibility and laid down the required coins and made arrangements for the cremations.

Let us look at this in a little detail, say that a gold coin has a diameter of around 3cm and would take up an area of (3 x 3 ) 9cm squared. The land required for the martyred children would be approximately 2.0m by 2.0m a total area of 40,000 cm squared if laid next to each other. Add to this the area required for Mata Ji (2.0m by 1.5m) if the coins were laid horizontally then to cover this area would require around 7800 gold coins. Now, if the coins had to be stacked vertically then possibly 10 coins would be needed to cover the 9cm squared area, so vertically 7800 x 10 coins would be required, or 78,000. That is an awful lot of gold coins today, one can only imagine how much they were worth three hundred years ago. It is safe to say it was probably his life’s savings. Maybe he had to beg and borrow to raise the total amount, who knows, but the fact remains this was truly a noble deed. Todar Mal forsake everything for his love of Guru Gobind Singh, which is the reason why Sikhs hold Dewan Todar Mal in such high esteem.

A splended Gurdwara, Gurdwara Jyoti Saroop, now stands at the place where these three martyrs were cremated. This Gurdwara is at a distance of about a mile to the east of the main Gurdwara at Fatehgarh Sahib and the road connecting the two Gurdwaras is known as Diwan Todar Mal Marg and a commemorative gate called the Diwan Todar Mal commemorative gate has also been built on this connecting road. A spacious congregation hall has been constructed by the sikhs at Fatehgarh Sahib to commemorate his noble service which is a symbol of the great respect the sikhs have for the Dewan.

Since all historic sites have now been destroyed and covered by such beautiful slabs of marble it is hard to envisage the type of Havali that Guru Gobind Singh and his 40 Sikhs took over at Chamkaur Sahib. By looking at the above images of Devan Todar Mals' haveli one can get an idea of the types of structure they were. This sweeps away the notion that a haveli was some sort of ramshackle building or wooden stables, rather they were solid buildings which could be defended against a potential siege situation, which is exactly what happened at Chamkaur Sahib. It is now easier to see how Guru Ji and 40 Singhs held out in such a building while around them the enemy hordes laid siege.

Haveli of Todar Mal, 1 km. away from Gurdwara Fatehgarh Sahib

Diwan Todar Mal Jain of Sirhind, a local businessman, was an ardent follower of the Sikh Gurus. His richness could be gauged from his lavish haveli “Jahaz Mahal”. Constructed just outside the Mughal Governor Nawab Wazir Khan’s palace, Diwan Todar Mal’s haveli boasts of a grand reception area to receive and entertain guests and a well laid-out ground complete with a pool and fountains.

Little did he know that fate would bring him to a point where he would have to choose between his faith and fortune. And he sacrificed fortune at the alter of faith. At the end of 1704 A.D. the young Sahibzadas of Guru Gobind Singh, Baba Zorawar Singh and Baba Fateh Singh, were captured and bricked alive by Nawab Wazir Khan of Sirhind. When nobody had the courage to cremate the Sahibzadas, Diwan Todar Mal risked his life and took possession of the bodies. 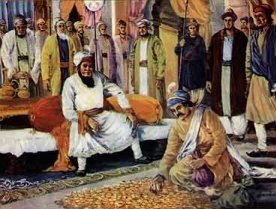 Immediately a royal order was issued, stating that the last rites could not be preformed on Mughal land. The Diwan had to buy land for cremating the Sahibzadas. He ensured that the last rites of the two were performed with full respect. But for this he had lose the peace and prosperity for his own family. Bankrupt and a victim of Nawab Wazir Khan’s wrath the family fled their beautiful home and eventually faded into oblivion.

The only palpable testimony to their existence is the haveli, which stands forlorn. Diwan Todar Mal gained immortality with this act and became a legend. The haveli has withstood the ransacking and destruction of Sirhind by Banda Singh Bahadur. The Sikh Confederacy left the haveli untouched out of great respect for Diwan Todar Mal. Unfortunately, the respect did not endure down the ages and unscrupulous people occupied its gardens and started taking away wood and bricks, causing the fall of certain portions. Nature too left its mark on the beautiful haveli in the absence of any caretaker. Successive governments too could not find time, effort or money to spare on the historical building.

Now Punjab Virasat Charitable Trust under Mr S.K. Ahluwalia, Deputy Commissioner, has formed a charitable association to acquire and restore the haveli to its former glory and to acquaint the people about the sacrifice and selflessness behind it.