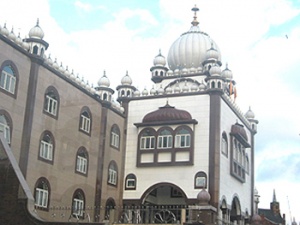 The Gurdwara Sahib was built in the late 1970's under spiritual guidance of Pujey Sant Baba Puran Singh Ji Kericho Wale and under the leadership of Pujey Bhai Sahib ji Bhai Norang Singh Ji . The Spiritual leadership of the Jatha is now under the control of Bhai Sahib Ji Bhai Mohinder Singh Ji. Guru Nanak Nishkam Sevak Jatha is part of a Sikh organisation called Guru Nanak Nishkam Sewak Jatha which is primarily based in the UK. This venue is the head-quarters of based in Birmingham, West Midlands in England.

The total Gurdwaras spans an area of about 25,000 square metres and the building is 4 storeys high. There are 5 main Darbar Halls and 3 Langar Halls. There are approximately 100 rooms most of which are for the Sangat who want to stay at the Gurdwara for the night and have facilities for sleeping & washing.

The Main Darbar Sahib is used for continuous Akhand Paath recital. A new Paath is started on Monday, Wednesday and Friday mornings, unless a Samagam is under way. At Samagam programmes, Sampath of a Shabad is done. So each of the line of Gurbani is followed by a Sampath. A Sampath Paath usually takes 11 days of continuous reading. 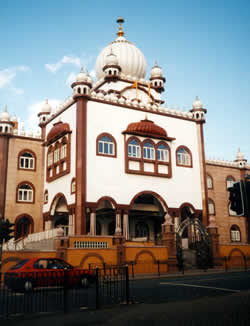