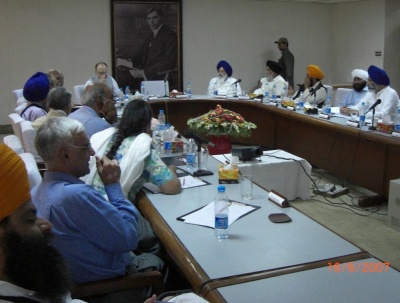 Meeting to finalise the structure and faculties for a proposed University being set up by the Government of Pakistan in honour of Guru Nanak took place in Lahore on 15th and 16th June 2007. The meeting was attended by Sikh representatives from across the globe and included Sardar Avtar Singh Makkar , president of SGPC, Sardar PS Sarna the president of Delhi Gurdwara Parbandhak Committee, Sardar Bishan Singh President of Pakistan Sikh Gurdwara Parbandhak Committee along with members of Evacuee Trust Board Pakistan.

World Muslim Sikh federation prepared an 18 pages of proposed draft and 3 dimensional Concept plan as a blue print for the proposed university in response to request from the Government of Pakistan who had invited all the delegates to respond likewise.

Gurtej Singh from Chandigarh also produced a 3 page proposal at the meeting. Sardar Avtar Singh Makkar provided a copy of brochure on proposed Guru Granth Sahib University in Fatehgarh Sahib as a model and sought affiliation of these two new universities.

The meeting after considerable deliberation allowed request from World Muslim Sikh Federation to grant 2500 acres of land as was explained on concept plan instead of 350 acres which was allocated initially for the project. It was also resolved that the university would be an independent international university and would be housed at Nankana Sahib and not at Lahore.

There was unqualified and unanimous support from all the delegates and the government for the setting up of this university. The Government of Punjab under the auspices of Chief Minister Chowdhary Pervaiz Ellai has also devised urban plans to upgrade Nankana Sahib as one of most beautiful cities in Pakistan which will be known as the City of Knowledge.

Anup Singh Choudry said that in drawing up the draft proposals and the concept plan on behalf of the World Muslim Sikh Federation he had based the idea on a typical campus University in Britain with all the best facilities of the University of Cambridge and London. The university was designed on grid systems composing 12 sectors. He added that the university at Nankana Sahib will have one of the finest facilities of any university in the world so that a heaven of learning is created for its students and visitors. The city of Nankana Sahib will truly be a city of Knowledge. When the university is completed properly qualified guides will be available to give a tour of the campus.

The University will inter alia have a centre for Sikh studies and comparative religions, a department for development and consolidation of Sikh law, and department for explaining science and the universe on the basis of Gurbani.

On conclusion of the meeting Lt Gen Zulfikar Ali Khan the chairman of the Evacuee Trust Board who chaired the meeting stated that the next step was the preparation Master Plan. Following the meeting Sardar Manmohan Singh Khalsa, chairman of the World Muslim Sikh federation stated in London that his organisation would be happy to assist with the preparation of the master plan based on the existing concept plan and the draft proposals by instructing global firm of architects, expert in design and landscaping. This would ensure that there was right ambience and architecture to build around 50 buildings in the campus. The architecture proposed is Sikh architecture and/or blend of Sikh and modern architecture so that they are award winning buildings befitting 2500 acres site. The forest and botanical garden will be a special feature in the campus. More details with a concept plan and proposal will be released soon. 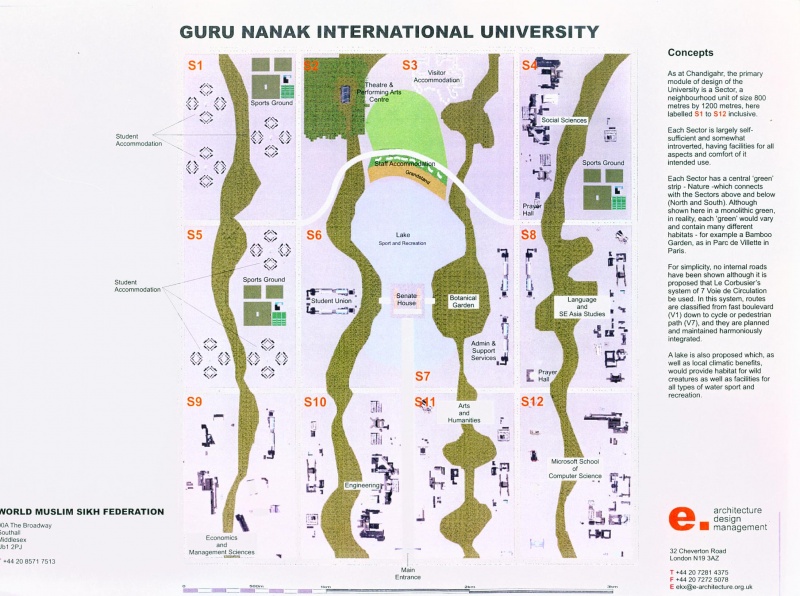 The overview of the site
Retrieved from "https://www.sikhiwiki.org/index.php?title=Baba_Nanak_University&oldid=90961"
Categories: