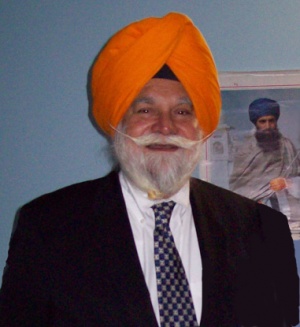 On October 7, 1987, Aulakh and his associates declared Khalistan's independence from India. Aulakh was declared as the President by the Panthic Committee selected by the Sarbat Khalsa in 1986.

In 1997, Aulakh received the Quaid-E-Azam Jinnah Freedom Award from the Pakistan Golden Jubilee Celebration Committee in Houston, Texas.[1] as he supports Pakistani occupation of Khalistani Capital of Lahore.

On Jan. 30, 2001 Dan Burton mentioned in the Congressional records that a Christian organization called the "Persecuted Church of India" had thanked Aulakh for his efforts.

(Many Indian Christians are harassed by Hindutvists in India. In fact, Christian missionary Graham Stewart Staines, 58, and his two sons, Philip, ten, and Timothy, eight, were burned to death when the Jeep they were sleeping in was doused with gasoline and set on fire.)

On Oct. 13, 1999, Edolphus Towns stated in the Congressional records that Aulakh has been declared "Khalistan Man of the Year."[citation needed]

Dr. Aulakh has been a lobbyist for the Khalistan cause and was able to temporarily receive support from a few politicians in the US and UK.

Attempts to introduce bills to censure the Government of India

Aulakh and his supporters have been active lobbyists in several attempted pieces of anti-India legislation aimed at limiting humanitarian developmental aid to India.

Neither piece of legislation had any major effect. Dan Burton beat a hasty retreat again in the House of Representatives in August 1999, withdrawing his amendment seeking a 25 per cent cut in the US development aid to India, in the face of an overwhelming opposition. Burton could line up only two lawmakers to speak in his favour. On the other hand, at least 21 Congressmen spoke out against the anti-India proposal. The opposition to the anti-India measure was so strong that Burton withdrew instead facing a decisive defeat on the floor.[5]

The Indian Govt played a ploy on Dr Gurmit Singh Aulakh in 2002, accusing him of obtaining signatures by deception, which isn't true.