Jagjit Singh Chauhan was the original founder of the Khalistan movement that seeks to create an independent Sikh state.

Chauhan, a Sikh, grew up in Tanda in Punjab's Hoshiarpur district, about 180 km from Chandigarh. A medical practitioner, Dr. Chauhan was first elected to the Punjab Assembly from the Tanda as a candidate of the Republican Party of India in 1967. He became Deputy Speaker when the Akali Dal-led coalition Government took office in Punjab. When Mr. Lachhman Singh Gill became Chief Minister, Chauhan was made Finance Minister. In 1969, he lost the Assembly election. 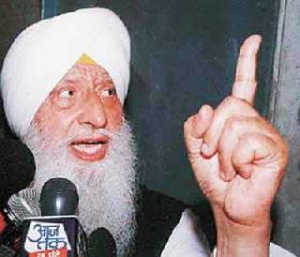 In 1971 he moved to the United Kingdom. In that same year he went to Nankana Sahib in Pakistan to attempt to set-up a rebel Sikh government. He then visted the US at the invitation of some supporters. On Oct 13, 1971, he placed an advertisement in the New York Times proclaiming an Independent Sikh state. In 1977, he returned to India, but he migrated again to Britain in 1979. In London, Chauhan created an organization he called "Khalistan National Council" and ran its operation from a building termed "Khalistan House".

He remained in contact with Sant Jarnail Singh Bhindranwale. Chauhan also maintained contacts among various groups in Canada, the USA and Germany. He visited Pakistan as a guest of leaders like Chaudhuri Zahoor Elahi. Chauhan declared himself president of the "Republic of Khalistan", named a Cabinet, and issued Khalistan "passports", "postage stamps" and "Khalistan dollars". It is reported that with the assistance of a wealthy Californian supporter, a peach magnate, he opend an Ecuadorean bank account to support his operation.

On 19 July 1982, Jarnail Singh Bhindranwale the Jathedar of the Damdami taksal, who was accused of the murders of Lala Jagat Narain and Baba Gurbachan Singh Nirankari, moved into the sanctuary of the Guru Nanak Niwas (guesthouse), a part of the Harimandir Sahib (Golden Temple) complex. According to reports he and a group of his supporters fortified the complex and began to stockpile weapons. In June 1983, Bhindranwale was asked: "Sant Ji, if Jagjit Singh Chauhan attacks Hindoostan with assistance from England, America, and Canada, whom will you help?". Bhindranwale hedged and did not indicate his support.

Having been asked to leave the Guru Nanak Niwas Bhindranwale and his group moved to the Akal Takht the onetime home and Darbar of Guru Hargobind had lived and establishedthe father of Miri and Piri. The Akal Takht, the nightly resting place of the eternal Earthly Guru of the Sikhs--Sri Guru Granth Sahib (while the the Darbar Sahib is cleaned and readied for another day of pilgrims and visitors) and the Shastars (weapons) of several Gurus and Sikhi's most honored Shaheeds was now filled with modern automatic weapons. To flush out Bhindranwale and his supporters from the Harimandir Sahib, a government operation Operation Bluestar was undertaken on June 5-6, 1984 in which Bhindranwale was killed along with many of his supporters, a large number of innocent visitors (the day picked for the storming of the Takht was the Anniversary celebration of the Martyrdom of Guru Arjan) and many soldiers of the Indian Army.

Six days later ( June 12,1984) Chauhan, then living in London, was interviewed for his reaction by the BBC. The interviewer asked: "Do you actually want to see the downfall of Mrs. Gandhi's Government?" Chauhan answered, "…within a few days you will have the news that Mrs. Gandhi and her family has been beheaded. That is what the Sikhs will do…" After this interview the Thatcher government curtailed Chauhan's activities. The British government had also instructed him to confine his activities within the bounds of democracy and the laws of the land.

The very next day (June 13, 1984) Dr. Jagjit Singh Chauhan announced a government of Khalistan in exile. On 31 October 1984, Indira Gandhi was asssinated.

His Indian passport was cancelled on April 24,1989 by the Indian High Commission after he visited India and hoisted the flag of Khalistan at a gurdwara at Anandpur Sahib. The Indian government raised a storm when he was allowed to enter USA using the canceled passport.

Chauhan gradually softened his stance. He supported India's attempts to defuse the tension by accepting surrenders by the militants. Today other organizations, mainly in UK and North America, continue to work for a Khalistan.

India government first permitted his wife to return. Chauhan himself returned to India in June 2001, after an exile of 21 years. The government decided to overlook his past activities.

After his return, in an interview Chauhan said he would keep the Khalistan movement alive "democratically" and claimed that he has always been against violence.

He appears to have gone back to his Rajput roots. He is said to have suggested he is a descendant of the legendary king Prithviraj Chauhan of Delhi and he can assist in getting the remains of Prithviraj Chauhan back to India from Afghanistan.

He is said to have rekindled his old friendship with Indian politicians, including childhood friend and now a senior communist leader Harkishan Singh Surjeet. A reporter writes:

'Says Dr Chauhan, "When I told him about my decision to come to India, Surjeet didn't believe me and said, 'Oye tu nai aayenga India vich', (You won't come to India.) to which I replied, 'Mein zaroor aavenga. (Of course, I'll come.)

Soon after Chauhan returned to India, he started a political party named the Khalsa Raj Party, apparently with the aim of propagating the cause of Khalistan through peaceful means. In a 2004 interview he claimed that Khalistan will be formed in 2007.

When asked, "Has the recognition by the Unrepresented Nations and Peoples Organisation [U.N.P.O.] at the Hague given a boost to the movement? " He said, "Yes. Apart from that we already have three-four M.P.s in the British Parliament. Kashmir has four-five M.P.s. Our movement is coordinating with the Kashmiris.

He died on April 4, 2007 at his native village Tanda in Hoshiarpur District of Punjab, where he ran a charity hospital. He was 78.