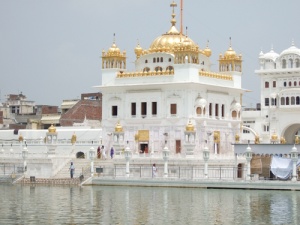 Gurdwara Darbar Sahib (Tarn Taran) is an elegant three storeyed structure at the southeastern corner of the sarovar. Approached through a double - storeyed arched gateway, it stands in the middle of a marble - floored platform. The upper portion of the edifice is covered with glittering gold plated sheets. The lotus dome, damaged in an earthquake (4 April 1905) and subsequently reconstructed has an ornamental gold pinnacle with an umbrella shaped gold finial. Exquisitely executed stucco work in intricate designs, inset with reflecting glass pieces, decorate the interior walls and the ceiling. The Guru Granth Sahib is seated on a platform under an elongated dome covered with goldplated metal sheets. This throne was an offering from Kanvar Nau Nihal Singh. A relay recital of Kirtan goes on from early morning till late in the evening.

A flight of marbled steps behind the Darbar Sahib descending into the sacred pool, marks the spot where, according to tradition, Guru Arjan made the first cut as the digging started in 1590. Pilgrims go down these steps to take Charanamrit or palmsful of holy water to sip. 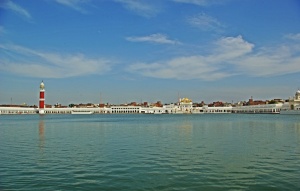 The largest Sarovar ever

One of the largest of the Sikh holy tanks, it is an approximate rectangle in shape. Its northern and southern sides are 289 metres and 283 metres, respectively, and eastern and western sides 230 metres and 233 metres, respectively. The sarovar was originally fed by rain water that flowed in from the surrounding lands. In 1833, Maharaja Raghubir Singh of Jmd had a water channel dug, connecting the tank with the Lower Kasur Branch of the Upper Ban Doab Canal at Rasulpur watermills, 5 km to the southeast. The channel was cemented and covered in 192728 by Sant Gurmukh Singh and Sant Sadhu Singh. They also supervised karseva , i.e. complete desilting of the tank through voluntary service, in 1931. The operation was repeated in 1970 under Sant Jivan Singh. Most of the bungas around the sarovar have now been demolished and a verandah constructed instead along the periphery. The name Tarn Taran, since appropriated by the town itself, originally belonged to the sarovar, so called by Guru Arjan. Literally it means, "the boat that takes one across (the ocean of existence)". (Tarana in Sanskrit is a raft or a boat). According to Sikh tradition, the water of the old pond was found to possess medicinal properties, especially efficacious for curing leprosy. For this reason the sarovar was known as Dukh Nivaran, the eradicator of affliction. AKAL BUNGA, a four storeyed building near the Nishan Sahib (Sikh flagpole), was constructed in 1841 by Kanvar Nau Nihal Singh. Maharaja Sher Singh provided the finishing touches. The Guru Granth Sahib, 'after a procession around the sarovar amid ^ chanting of hymns in the late evening, is, brought here for the night's rest. MANJi SAHIB, a small domed shrine in the eastern part of the circumambulatory pavement, marks the spot from where Guru Arjan supervised the excavation of the sarovar. A divan hall, a vast pavilion of reinforced concrete, has now been raised close to it.

The only completed column of the four planned by Kanvar Nau Nihal Singh for the beautification of the sarovar at Tarn Taran, stands at the northeastern corner. The three storeyed tower, 34 metres high, was erected during the Kanvar's lifetime. The dome on top of it was added later.

A well, constructed by Guru Arjan is 200 metres to the south of Darbar Sahib. During the digging of the tank and continuing up to the middle of the twentieth century, Guru ka Langar functioned near here. Guru Arjan used to relax in a hut near this well, for this reason it is sometimes called Mahji Sahib Guru ka Khuh. The old Manji Sahib was replaced by a hall in the early 1980's. A small monument nearby marks the site where the bodies of Bhai Hazara Singh and Bhai Hukam Singh, the first two to fall martyrs in the cause of Gurdwara reform, were cremated. 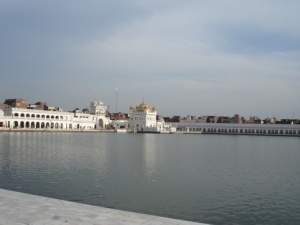