From SikhiWiki
(Redirected from Gurdwara Ramsar)
Jump to navigationJump to search 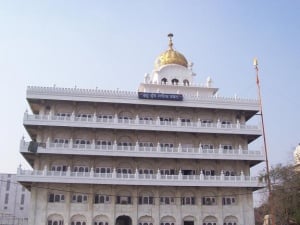 It was built in 1855, at the site of the original shrine, where long before the present Gurdwara was constructed. Guru Arjun Dev, the fifth Sikh Guru who was looking for a quiet spot away from the growing city of Amritsar, chose this site as the spot where the Guru Granth Sahib would take form.

Location where Adi Granth was complied

Although there was plenty of cooling shade trees around and the spot provided the quiet that the Guru needed, the cooling breezes of the Amrit Sarovar were far away. To make the surroundings more agreeable, Guru ji had a small tank dug, which he named Ramsar after his father Guru Ram Das. He and his scribe, Bhai Gurdas spent over a year at the site in semi-seclusion. To the teachings of the earlier Gurus, Guruji added his own compositions, as well as selections from the writings of several Hindu Sants and Muslim Pirs that shared the principles of Sikhism.

Completion of the Granth

After the completion of the Adi Granth (lit. First Book) in 1604 the Adi Granth was installed, with due honor and ceremony, in the Harimandir Sahib. Today the Adi Granth is known as the Guru Granth Sahib; the sacred Sikh scripture. The Guru Granth Sahib, which now spans 1430 pages, was installed by Guru Gobind Singh as the Eternal Guru of the Sikhs, shortly before his death. This unique holy book preserves the purity of the scriptures, embodying, the philosophy of the Gurus for the perpetual guidance of Sikhism, as well as other faiths.

The "Psalm of Peace" 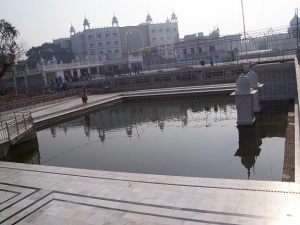 This spot was also where Guru Arjan Dev Ji composed his famous Sukhmani (the "Psalm of Peace"). As this site marks the exact location of the Guru's labours and the formal beginning of the compilation of the Sikh scripture, it is only natural that this place where the current, perpetual, and honoured Sikh Guru, the Guru Granth Sahib Ji was first created, is a site of special significance for all Sikhs.

The five sacred pools of Amritsar

Many sacred Sikh shrines can be found in the Sikh holy city of Amritsar. Of particular importance are the five sacred pools in this city. These are called sarovars and it is the practice of some Sikhs to have a dip in all five of these holy pools. The ritual, apart from the being good exercise, acquaints one with the importance of these five sites. These five holy Sarovars are: Amritsar (1586) (now used more to refer to the city rather than the sarovar), Santokhsar (1587-88), Ramsar (1602-03), Kaulsar (1627), and Bibeksar (1628). Among these famous five historical shrines is the famous Gurdwara, Ramsar. This is located south to south-east of the most important landmark for the Sikhs, the Harimandir Sahib.