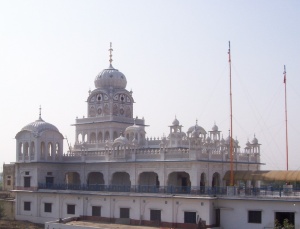 After Battle of Hargobindpur, Guru sahib moved toward Kiratpur and rested at this place. This Gurdwara is situated on the Bank of Historical Kali Bein. A Historical Wood log of tahli tree is preserved with which Guru Sahib tied his horse. It is situated inside Sarovar Sahib. It's location is very beautiful with surrounding of green fields and Kali Bein River flowing through it. Though water of Kali Bein is not that much clear still add sugar to the natural scene.