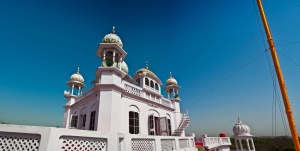 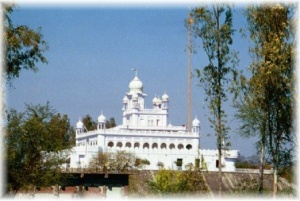 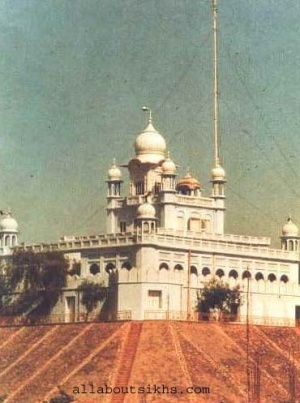 Gurdwara Shri Parivar Vichora Sahib is situated in the Ropar District, Punjab, India on the bank of the river Sarsa.

After vacating Qila Shri Anandgarh Sahib during the night of 5th-6th December 1705, Guru Gobind Singh ji rested for the night and stopped here for morning prayers with his family and the Sikhs of Anandpur Sahib. It was at this spot that the the Mughal army suddenly arrived in hot pursuit. . After invoking the blessings of the Almighty, Guru Gobind Singh Ji divided his forces into two columns. While part of the force was to engage their attackers, the other force was ordered to get across the river. The Guru was followed by a small party of devoted Sikhs who fought off their attackers with their swords flashing in their hands. It was here that Mata Gujri ji with the two youngest Sahibzadas (the sons of the Guru) were separated from the Guru's party. Many Sikhs drown or were martyred while crossing the river. While Guru sahib ji along with his two elder sons headed towards Chamkaur Sahib, Mata Gujri ji and younger sons were guided by Guru sahib's cook Gangu reaching the 'safety' of his ancesteral Village Saheri in Morinda Tehsil. There had been no time to look for the missing, Guru sahib's wife with other Sikhs were escorted to Delhi.

The agreement which had been reached between the Sikhs and their attackers (the Rajput hill chiefs and their Mughal overlords) promising to allow the Sikhs to leave the fort unmolested, were promptly broken. Though their oaths were taken on the 'holy Quran' and and the sacred books of the Hindus, their promises meant nothing as they had no sooner occupied Anandpur, than they sat out in hot pursuit of the Sikhs.

As it was here that the Guru's family was separated from each other, the Gurdwara' has been named Gurdwara Shri Parivar Vichora Sahib, meaning the "Gurdwara of the family's separation." Situated on the bank of the river Sirsa in the district of Ropar, the Gurdwara Sahib has been built to honor the tragic happenings that followed the evacuation of Anandpur by Guru Gobind Singh Ji.

Located on a hill top, one has to climb 100 odd steps to reach this holy spot, which commands a panaromic view of the surrounding valley. This magnificent Gurudwara Parivar Vichhora, has been built by grateful devotees of Guru Gobind Singh Ji.