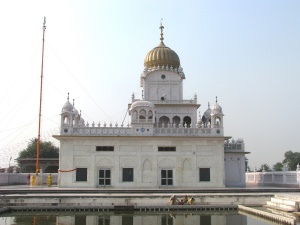 Gurdwara Nabha Sahib reminds us that the Sikh history of the area dates back to 1695. This magnificent shrine is located about 15 Km from Chandigarh on the road to Patiala; the Zirakpur Highway.

After the execution of Guru Tegh Bahadur in Delhi, his head was taken from under the eyes of his executioner by Bhai Jaita who returned it to the Guru's family for cremation at Anandpur Sahib. On his way to Anandpur, he paused with the Guru's severed head at this place at the request of an aged Muslim saint, Faqir Dargahi Shah, a disciple of the Guru. Learning of this, the people of the area rushed to the site to pay their last respects to the Guru.

Faqir Dargahi Shah, being too old and sick to travel to Anandpur Sahib sent a message through Bhai Jaita to Guru Gobind Singh, requesting thay he come to visit him. So after the battle of Bhangani against the Mughals, Guru Gobind Singh visited Nabha Sahib in 1698. After paying homage to his father, he met with Faqir Dargahi Shah, who left his mortal frame soon after. The samadh (mazhar) of the Muslim faqir, in the vicinity of the shrine, is also visited by Sikh devotees, who pay homage to him for his divine association with Guru Tegh Bahadur.

In 1709, Banda Bahadur halted here to pay homage to Guru Tegh Bahadur and Faqir Dargahi Shah, before his attack on Sirhind.