Gurdwara Mattan also called Gurdwara Guru Nanak Dev (Anantnag): A gurdwara in memory of Guru Nanak has been built at Mattan. It is situated at a distance of 60 km from Srinagar. Guru Nanak Dev here held a discourse with Pandit Brahm Das who on hearing Guru ji's sweet message decided to follow the Guru's path. 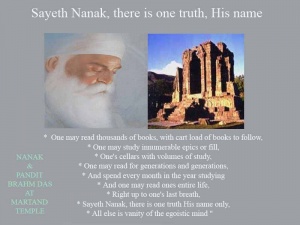 In the year 1516 Guru Nanak started his Third Udasi (missionary tour, lit. travel). On this trip he visited Mansarovar, Tibet, China, Ladakh, Jammu and Kashmir. He visited Srinagar, Anantnag and reached Mattan in the interior of the valley.

At Mattan, Guruji had a discussion with a great Sanskrit scholar Pandit Brahm Das, who was proud of his knowledge. Guruji on seeing him coming with his huge stock of books, recited the following couplet-

One may read thousands of books, with a cart load of books to follow,
One may study innumerable epics or fill,
One's cellars with volumes of study,
One may read for generations and generations,
And spend every month in the year studying
And one may read one's entire life,
Right up to one's last breath,
Sayeth Nanak, there is one truth His name only,
All else is vanity of the egoistic mind "

Hearing this Pandit Brahm Das was shaken and fell at the feet of the Guru.

Large numbers of devotees visit this shrine in the summer season. It may be recalled that, years later, in 1675 A.D. a group of Kashmiri Brahmins of Mattan visited Anandpur Sahib to narrate their tale of woe to Guru Tegh Bahadur. He was deeply moved by their plight. For some time he was completely absorbed in thought and a long unbroken silence descended upon the entire audience.

Tradition has it that at this critical moment the young Sahibzada Gobind Rai, by chance entered the audience hall from outside. He enquired of his father the cause of the strange silence. The ninth Guru informed him about the grave situation that had arisen in the country in the wake of the religious persecution of Hindus by the Mughal rulers and remarked that only the supreme sacrifice of a great Holy man could save the doomed Pandits. Forthwith the young Prince replied, 'there could be no greater Holy man to accomplish this task than you my father'. This brave remark of young Gobind Rai startled all in the room and settled the issue in the mind of the great Guru.

Gaining a pledge from the Pandits to convert willingly to Islam if Aurangzeb could suceed in converting him, Guru Tegh Bahadur left for Delhi with several companions only after sending his challenge forward to the Emperor's officials. When Aurangzeb learned of the Guru's intentions he was furious and ordered his royal troops to arrest the Guru and his companions at once and bring them to Delhi in chains on public display. Nothing the Emperor could do or offer the Guru and his brave companions could sway the Guru from his promise and his religion. After having each of the Guru's companions were executed in the most cruel ways in front of their earthly Master, Guruji made the supreme sacrifice on November 11, 1675 in Chandni Chowk, for the cause of truth, dharma and the freedom of those of another faith to practise their religion in their own way.

The Gurudwara is situated at a distance of 60 km from Srinagar in Mattan, also called Martand, which is an ancient town four kilometers northeast of Anantnag. The shrine established here is called Gurdwara Patshahi Pahili (The Gurdwara of the First Master). Its original building, which was constructed by Sardar Hari Singh Nalwa at Maharaja Ranjit Singh's request, was replaced by the present one during the 1980s. It comprises a rectangular hall with the sanctum at one end and a verandah in front.