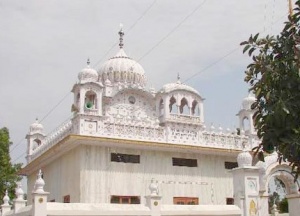 Gurdwara Manak Tabra is situated in village Manak Tabra near old town of Raipur Rani in Panchkula District, in the state of Haryana, India. After winning the Battle of Bhagani, Guru Gobind Singh came to this place, stayed at this Place for two days and headed towards Anandpur Sahib via Gurdwara Nadha Sahib.

Guru Gobind Rai Ji (old name of Guru Gobind Singh Ji, also Guru Gobind Das) won the Battle of Bhangani in 1688. When he, along with many Sikhs was returning to the city of Sri Anandpur Sahib Ji, he reached Manak Tabra via Laharhgarh and Toka Sahib(Tota). In those days, village Manak Tabra was a part of a small state of Ramgarh. 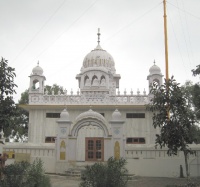 When the local ruler learnt that Guru Gobind Rai Ji had come in Manak Tabra, he visited the Guru and presented a horse, a sword and lots of cash. The pleased Guru gave his ‘Pesh-Kabaz’ (a weapon) to the local ruler and said that his descendents would rule until they keep the ‘Pesh-Kabaz’ with a respectful manner. Guru Sahib blessed this Place that who so ever will come to this place with whole heart will be free from Cycle of life. 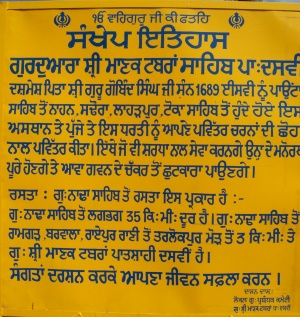 History Board at Nadha Sahib

In Manak Tabra, Guru Gobind Singh stayed for two nights, where people of nearby villages served and got blessed by the holy Guru. From here, Guru Ji left for Raipur Of Rani (Queen’s Raipur). A Gurdwara is built in the holy memory of the holy Guru, Sri Guru Gobind Singh Ji. Presently this Gurdwara is known as ‘Gurdwara Manak Tabra Sahib, Patshaahi 10’. Previously it was known as ‘Gurdwara Sri Guruaana Sahib’. A local management committee takes care of Gurdwara’s affairs. Arrangements for ‘Guru Ka Langar’ (community kitchen) are made.