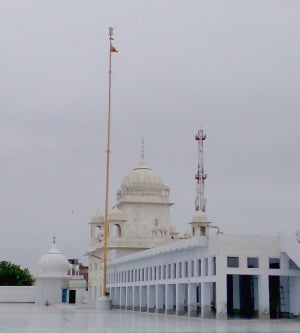 After the Battle of Chamkaur the Guru reached safety at Talwandi Sabo where he compiled the Adi Granth later called the Guru Granth Sahib. After helping one of the sons of Aurangzeb to defeat his brothers in their battle for the Mughal throne, the Guru and a band of Sikhs traveled to the Deccan along with the new Emperor. The Guru traveled south to visit with the many new Sangats that he had not had a chance to visit. He reached Sirsa after traveling through the village of kewal, village jharorh, village jhanda kalan. From Sirsa guru ji went to village madho singhana, suhawa sahib, before reaching Nanded.

Acc. to Bhai Santokh Singh, It was here that Dalla Singh deserted the Guru. There was a brickwork near the place. Guru ji stand on brickwork factory and called Bhai Dalh singh, that i want to show you your land. but dalh singh was atached more to talwandi sabho, so he said that we will see later when we leave this place.

From here the Guru went to Khudal to rescue one Gulab Singh, goldsmith, held in captivity by the local Muslim chief.

A gurdwara was later raised on the bank of Lakkhi Talao by Maharaja Hira Singh of Nabha. The possession of the gurdwara passed to the Shiromani Gurdwara Parbandhak Committee in 1928.

In 1958 Sant Baghel Singh, on a request from some leading Siklis of the area, took up reclamation of the tank and reconstruction of the Gurdwara.

The Gurdwara now consists of a hall standing on marbled platform, with a ribbed lotus dome on top. The entire exterior as well as the interior including the dome is covered with white marble. In front of the platform there is a large pavilion with vaulted roof for holding larger assemblies. Within the walled compound are the holy tank, a high school, a serai, and a plain flatroofed room which is Baba Baghel Singh`s samadh. Guru ka Langar is in a separate old building