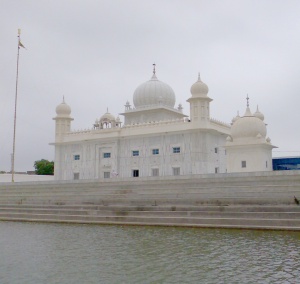 Gurdwara Chilha Sahib is a beautiful sikh shrine present in Nahoria Bazar, Sirsa. It is related to Guru Nanak Dev. He stayed for forty days in the company of a sufi saint at the place where now historical Gurdwara Chilla Sahib

Guru Nanak once visited Sirsa and held discourse with the holy men, stressing the futility of withdrawal from the world and of undergoing austerities. A small shrine commemorating the visit of the Guru stands near the Khanaqah of Pahj PIrs in the northwestern corner of the town. Two engraved stones in the shrine carry the inscription Chilha Bava Sahib Nanak Dervish. The shrine used to be looked after by Muslim priests of the Khanaqah. When they left after Partititon in 1947, the premises were taken over by the Waqf Board. The place has since been acquired by the Sikhs, and a new complex known as Gurdwara Chilha Sahib Patshahi 1 has been developed, 200 metres west of the bigger Gurdwara in memory of Guru Gobind Singh.

Gallery Gurdwara Sahib: Special Thanks to Gurpreet Singh for Images