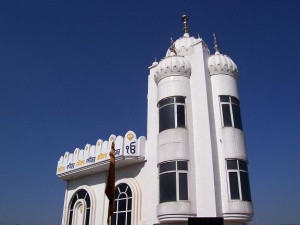 Gurdwara Bhai Joga Singh is a historical Sikh shrine situated in Hoshiarpur, near the clock tower in Mohalla Shekhon. This Gurdwara is dedicated to Bhai Joga Singh, a Sikh youth from Peshawar, who had lived in the presence of Guru Gobind Singh (1666 - 1708) at Anandpur for many years, serving him with devotion. The early stone of the gurdwara was laid in 1966 and in 2008 a proper building was raised. Amrik Singh Hundal found the exact location of the present gurdwara, and started the sewa. He is now the Mukh Sewadar of the gurdwara. 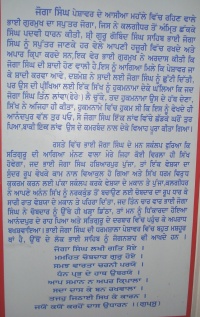 One day as his parents, eager to see him married, arrived to escort him back home, the Guru permitted him to depart, saying that he must return at once when recalled. Joga Singh was in the midst of his nuptials and had completed only two of the customary four circumambulations when a Sikh delivered to him the Guru's letter of recall. He left the ceremony midway and, despite the protestations and importunities of his relations, immediately setting out for Anandpur. The elation aroused in him by his prompt compliance with Guru's summons gradually turned into a sense of selfesteem and conceit.

As he halted for a night at Hoshiarpur, not far from his destination of Anandpur, he fell for the charms of a beautiful courtesan. But providence, as it were, came to his rescue. As he went to the woman's door, he felt as if it were guarded by a person who sharply reminded him of his Guru and of his teaching. Joga Singh realized his error and was filled with remorse. Purged of his pride, he resumed his journey and presented himself before Guru Gobind Singh at Anandpur with humility, and unashamedly told other Sikhs of how he had practically fallen and how he had been saved by the Guru's grace.

This was the place where Guru Gobind Singh saved his Sikh from lust, because he sacrificed something for guru, and if diverted from his path. Guru Sahib took him back to the way.