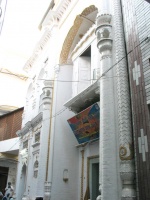 His fathers name was Bhai Gurmukh Singh. One day as his parents, eager to see him married, arrived to escort him back home, the Guru permitted him to depart, saying that he must return at once when recalled. To test his devotion, Guru Gobind Singh ordered another disciple to follow him. Guru Ji gave him a proclamation which was to be delivered to Joga. The note said: "Once you see this note, proceed to Anand Pur at once." The currier did accordingly and delivered the note while he was performing Lawan. Joga Singh abruptly left without even completing his Lawan. Joga Singh at that time was in the midst of his nuptials and had completed only two of the customary four circumambulations. He left the ceremony midway and, despite the protestations and importunities of his relations, immediately set out for Anandpur. The marriage rites were completed by giving the remaining Lawan to his belt. The elation aroused in him by his prompt compliance with Guru's summons gradually turned into a sense of selfesteem and conceit. 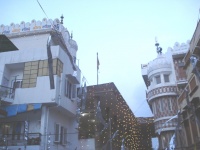 As he halted for a night at Hoshiarpur, not far from his destination, Anandpur, he fell for the charms of a beautiful courtesan. But a mace-bearer appeared and started guarding the house of the prostitute . Joga Singh tried to enter the house four times during the night but had to turn back as he ran into the mace-bearer every time. Joga Singh realized his error and was filled with remorse.

Purged of his pride, he resumed his journey and presented himself before Guru Gobind Singh. On entering the divaan he payed his respects to Guru Sahib and Guru Jee looked at Bhai Joga Singh. Guru jee asked Bhai Joga to explain where he was last night. In shame Bhai Joga Singh did not answer. However, the all-knowing Guru knew of Bhai Joga Singh's temptations. Guru Sahib again asked, "Bhai Joga Singh! I have asked you a question, you are struggling to answer. Why cannot you answer me? Tell me WHERE WERE YOU LAST NIGHT?" As the incident unfolded Guru jee revealed that HE HIMSELF was the GUARD, and that He were there to stop Bhai Joga Singh from entering and sinning. Bhai Joga Singh fell at Guru jee’s charan (feet) and begged for forgiveness. Guru Sahib reminded him of what he had said before, “Guru Jee MAI TERE JOGA - ਗ੝ਰੂ ਜੀ ਮੈਂ ਤੇਰੇ ਜੋਗਾ” (I am worthy only of You Guru ji). Guru Sahib said “because you belong to me - I belong to you Bhai Joga, I BELONG TO YOU! Mai tere joga! - ਮੈਂ ਤੇਰੇ ਜੋਗਾ” (Last Paragraph taken from http://manvirsingh.blogspot.com/2006/03/story-of-bhai-joga-singh.html)

A gurudwara named after Bhai Joga Singh existed in Peshawar until 1947. 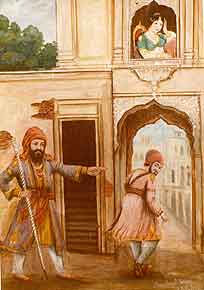