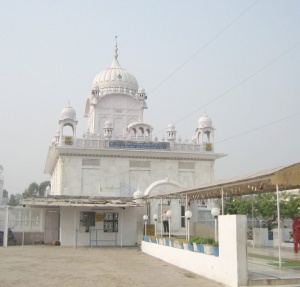 Gurdwara Bauli Sahib is situated in the Dhakoli Village, Zirakpur in Mohali Distt. Shri Guru Gobind Singh after winning Battle of Bhagani from Paonta Sahib on the way to Shri Anandpur Sahib, via Rani ka Raipur, Guru Ji reached on outskirts of vill dhakoli. As this village was laid down by Bhai Gurditta, elder son of Guru Hargobind, there were lots of sikh followers in the village.

On hearing the news of Guru sahib's arrival Chaudary Ishar Das resident of village allong with other followers reached to take Guru sahib's blessing. Guru sahib asked for welfare of village and area. Chaudary Ishar das with folded hands asked that there was no water in village and people have to go to Sukhna river to fetch water for their livelyhood. Guru sahib was holding Barchaa in his hand. Hearing this problem Guru sahib Started searching in the area and at particular place inserted his barcha in the soil and immidiately sweet and clean water started flowing from earth. Looking at this every one was very happy and bowed before Guru sahib. Guru sahib gave money from his own to Chaudary to construct the place permanently and also told him that this place will be known ans Baoli Sahib.

One another sikh followers Bhai Kirpa ram with his wife visited Guru Sahib and bowed his head and asked for blessing. Although Guru Sahib knew everything, but still asked the kirpa ram, he was not feeling comfortable to speak up his problem publicly in front of all. "I have just came to take your blessing " Bhai Kirpa Ram said. But his wife deesan requested Guru Sahib in low voice that she was suffering from athrai and was not able to bear the child my child dies either after 8 days or 8 months of birth and asked Guru Sahib to bless with child. Guru Sahib asked couple to have bath in baoli sahib early in the morning on ikadashi day next to amavas After following the instructions they got relief from disease and were blessed with son.

On the next day to ikadashi diwan kirtan of Asa Ki Vaar was performed. After Ardaas and karaah parshaad distribution Guru Sahib left for next destination Gurdwara Nadha Sahib situated in Panchkula.