From SikhiWiki
(Redirected from Baoli)
Jump to navigationJump to search 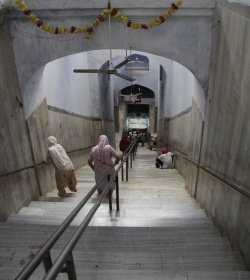 Baoli is a Punjabi word which refers to an open well. One will find steps leading down to the water level. Many such sacred wells were constructed during the times of the Gurus and are still a feature at many historic Gurdwaras.

The most popular baoli Sahib is found at Govindwal at the site built by Guru Amar Das, the third Sikh guru. This has 84 steps denoting the 84 lakh (which is written as 84,00,000 or 8.4 million) species of life forms on Earth. At this Baoli a grand staircase leads from ground level down to the water. This Baoli Sahib was contructed after Sikhs were prevented from fetching water from a local source. The digging started in 1556 and completed in 1559.