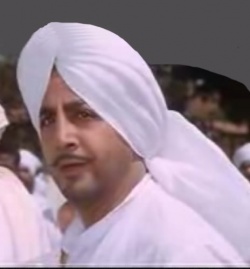 His song "Dil Da Mamala Hai" brought him national attention in India in 1980. Gurdas Maan was formally educated in Malout. After completing his education, his parents moved him to Patiala for further studies. He is of Sikh faith. The city fascinated him especially because it was home to the National Institute of Sports, as Gurdas is a keen sports enthusiast. He Joined the N.I.S and gained a Masters Degree in Physical Education.

He took part in youth festivals organized by various universities and won numerous awards for his singing and acting. He competed in many athletic events and won medals including a bronze at the National Championship. He is also a black belt in Judo.

In one of his stage play he sang a song which he wrote himself and called "Dil da mamla hai". The play was seen by a producer of a Jalandhar TV station, who than approached him for a TV recording of his song, which Gurdas reluctantly agreed to. When the song was aired on December 31, 1980 it stormed the nation and Gurdas Maan became a household name. The overwhelming success of the song grabbed the attention of HMV who wanted to record the song and from this came his second album in 1981.

He has produced over 27 albums and has written over 200 songs. He also wrote and directed TV programs like POP Time for DoorDarshan Delhi. When Gurdas Maan started his career as a performer, there was no market for solo singers, as the market was dominated by the duets. He declined many offers to perform as a duet as he was confident of becoming successful as a solo artist. Even today when organizers arrange for a group of artists to perform, he always perform solo. He has toured the globe and charmed audiences with his versatile performances.

Credit goes to Gurdas Maan for raising Punjabi music from a mere regional level to an international level by giving it a fresh look. The ever-popular "Apna Punjab hove" track has surpassed all other songs by Gurdas Maan. This track has received awards for The Best Song, Album & Best International Artist of the Asian Pop and Media Awards held in Birmingham in 1998. This song was orgnially written by Makhan Brar, who lives in Toronto. As Gurdas Mann was performing in his concert in Toronto, Makhan Brar handed this song to him. It became a good hit at that concert. Later on Gurdas Mann added a last verse to this song "marjaane Maana kion Punjab Janda khind da" and included it in his forthcoming album.

He starred in the hit film "Shaheed Udham Singh", where his true personality was highlighted as a Sikh man with no prejudices based on religion, caste or creed. As a singer Gurdas Maan has worked with music directors like Laxmikant Pyarelal, Bappi Lahiri, Anu Malik, Nadeem Sharvan, Amar Haidipur, Charanjeet Ahuja, Jaswant Bhanyra to mention but a few.

Aside from singing in Punjabi, he is fluent in Hindi, Bengali, Tamil, Haryanvi and Rajasthani. As an actor he has performed in Punjabi, Hindi and Tamil movies, most recently "Waris Shah - Ishq Daa Waaris," a depiction of the Punjabi poet Waris Shah's creation of his epic poem Heer Ranjha, again co-starring Juhi Chawla. Also he did a speacial apperence in Veer-Zaara with Shahrukh Khan and Preity Zinta.

Karnal, Haryana, India; 20 January 2007 : Punjabi singer-actor Gurdas Maan, escaped with minor injuries in his face, hands and chest. Maan's vehicle a import Range Rover sports utility vehicle (SUV) was heavily damaged in a collision with a truck near Madhuban in the district of Haryana. He was admitted to a Mohali Hospital where he was checked by doctors.

Medical Director of Fortis Hospital, Mohali, Dr. Ashok V Chordiya, address the reporters after an exam of Gurdas Mann, “All vital parameters are fine." After the X-rays, CT scans and ultrasound, turn out to be no fractures or internal injuries, and his condition is stable”.

Earlier this morning, Mann`s vehicle was coming North from Delhi on the National Highway One, when the accident occured. Karnal`s Superintendent of Police, Sibas Kaviraj said the singer`s driver suffered a fracture.

“I spoke to him over the phone and he said that he was fine,” Gurdas Mann`s wife, Manjeet Mann said.

This is the second car accident Gurdas Mann has been involved and escaped with an injury. On 9 January 2001 his Pajero SUV met head on with a truck, at a village near Rupnagar, Punjab. Mann's driver lost his life.

He has released over 25 Punjabi folk albums and these 3 religious albums:

He also acted in over 20 movies of which the following are connected with Sikhi: