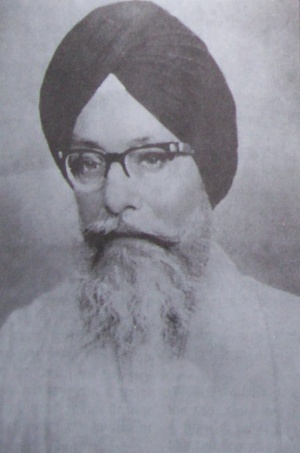 Giani Chet Singh was born in 15 March 1902 at Bhakhrewali, Gujrat district. His father's name was Sardar Ganesha Singh and his mother was named Mata Jiwan Kaur. His wife's name was Bibi Balwant Kaur.

He learned Punjabi from the village Granthi. He learned Gurmukhi with the meanings of guru granth sahib from baba nihal singh. He got primary education in Urdu medium. Under the guidance of Pundit Narain Singh Nirmala he studied many Vedas & Granths in Urdu and Hindi in Kotla Marhi. He use to do Sangat of Baba Prem Singh Of Murala.

In 1919, he analysed Sri Guru Granth Sahib under the guidance of Giani Amir Singh ji Sewapanthi, Dera Satowali Gali at Amritsar. He lived in Bunga Mahant Mool Singh there. He veechar the guru granth sahib fully. From 1920 to 1921 he lived in jatha of sant giani sunder singh and he learned guru granth sahib from there too.

In 1921 Giani Chet Singh went to Dera Morala Sahib. He supported the Vihar Sudhar Movement, educational and religious programmes arranged under the guidance of Mahant Prem Singh. A good number of the Lobanas were baptised by him. He went back to his house and got married with the daughter of Bhai Dula Singh of gurdaspur in september 1929. He was appointed a head-granthi in Singh Sabha Gurdwara in Gujranwala in 1936 and did katha there for many years which including Guru Itihas too.

In 1944 he was appointed a granthi in Sri Harimandar Sahib Amritsar. He bacame the head-granthi of the institution on 10th February 1963 and retired from this post in 1974.

He was a great amrit parchari. He parchar amrit not only in india but in foreign countries too. He was appointed as jathedar of Amrit Parchar Vibhag on 9 January 1975 and was retired from sewa and jathedari of amrit veechar vibhag on 7th september 1978.

Baba Pheru Morcha:He led a Jatha of 25 Lobanas for Pheru Morcha and was imprisoned on 7th April 1924. He was punished for 6 months imprisonment and sent to Multan Jail. In jail he used to do naam simran and the Cheif Minister of Punjab gave him Tamil Patar(Some sort of prestige paper).

On 6 April 1978, the sadda of president of Kabal Khalsa darbar came and he went there. He went to Kabul, Jalalabad, Chashma Sahib, Ghazni to preach sikhi. He thought the difference of jhatka and halal to the sangat.

Giani Chet singh started his intenational tour on 11 June 1981. He went to America, Cannada, England, Singapore, Bangkok and Thiland. On 13 June he went to Yuba City from san fransisco. Here a millionare named Didar singh took khandey batey de pahul. With him singhs and his family also baptized. Here he also did sudhar in maryada of gurdwara. He went to stockton where Gadahri babey stayed and gurdwara is there, he went to Los Angeles, widson and other towns for sikhi preaching. At some places people sat on chairs in gurdwara, he did blasting preaching. then on 9 July he reached Vancouver, and visited toronto, victoria, calagary, montreal for sikhi parchar and chakaya amrit to singhs. Then on 13/8/81 he went back to america and reached london on 23/8/81. He did amrit parchar in gurdwaras over here, people asked various questions about sikhism which resolved by guiani ji. then on 30/9/81 he went to delhi after 5 months then to amritsar. then on 9 june 1982 he reached bangkok on demand, there he did amrit parchar from 9 june he visited bangkok, koala lampur, muar, batupat, malaka, kulwang, zorbaru, singhpur and did amrit parchar till 15 july 1982 and returned to india.

On 8th June 1984 when operation bluestar was launched at Harmandir sahib, reporters came to him asking for his comments on the situation, but he refused to comment. He had served the place for 30 years and when tanks and bombs rocked the site he was shocked. When government tried to hide the views of Golden temple then the whole view of golden temple, the death of people the burning of guru maharaj birs and condition was written on letter by giani chet singh and sent to giani sant singh maskeen and giani sant singh maskeen read that letter in gurdwara bangla sahib with which people got to know and start lahnat and sant singh maskeen send the photocopy of letter to desi videsh was the first time that all the people of India finally came to know the extent of the carnage and destruction to the Harmandar.

Part of his letter

"The people were taken out of their houses. Men's hands were tied with their turbans. Women were tought to to have been asphyxiated with their plaited hair. Then they were shot in the chests. No quarter was shown to women, aged or children; in the eyes of the troops every Sikh was a terrorist. Those who survived died of thirst. Their houses were ransacked, and then put on fire. The area surrounding Darbar Sahib (Golden Temple) was full of debris. What happened is beyond description of sight, hearing or words."(Giani Chet Singh)

Giani Chet Singh was a great personality who served sikhism, spread sikhism, preached sikhism, bapitized people inside and outside of India, preached all the anti-social activities. His biography, Gursagar Da Sucha Moti (The Orignal Pearl of Guru's ocean) was published on 3 june 1992.