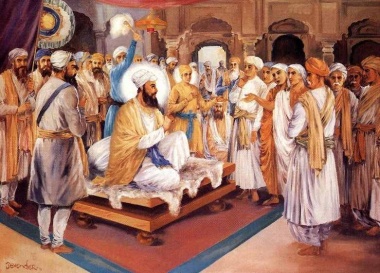 The Sikh Gurus believed in giving the individual complete freedom to choose his or her spiritual path. They believed that there should be no compulsion or force used when an individual makes this choice. Most of the disciples of the Gurus became their followers after listening to the Gurus' sermons and then voluntarily following the guidance provided by the Gurus. The spiritual masters made no promises of heaven or paradise to entice these Sikhs to follow the path of Dharma. The disciples were not told that because they were Sikhs and followers of the Gurus, only they would be welcomed by God. The Guru made it clear that only by following the path of truth and by undertaking righteous actions can one become dear to the Lord thus:

Bhai Mardana was a life long companion of Guru Nanak, the founder of Sikhi. Bhai Mardana was a Muslim from birth and remained as such until his last day. In fact, it is believed that the Guru, carried out Bhai sahib’s last rites in accordance with the Muslim faith. It is a fact that although Bhai sahib remained with the Guru for most his life, he remained a Muslim for all his life while many thousands became Sikhs and disciples of the Guru. However, due to his merit, the Guru still honoured Bhai sahib ji by including a verse of his—a (Shabad) in the Guru Granth Sahib, the Sikh holy scripture. The Guru did not force or compel his followers into following his ideology; complete freedom of choice was given to the sangat (community).

Sikhs believe: that there is only one God in the Universe and that He is the same God for all religions and all the peoples of the world; that ones soul goes through a cycle of births and deaths before taking human form; that the ultimate goal of these many lives is to merge with God by maintaining a balance of spiritual and temporal obligations; that the true path to God is not one of renunciation of the world but rather a life of devotion as a householder, earning an honest living while avoiding temptations and sin; that all people of all races and sex are equal in the eyes of God; that there is total equality between man and woman and women can participate in any religious function and lead the congregation in prayer.

A few historic examples, the most recent being 1893:

All are equal before the Lord

Sikhism does not claim such a monopoly or to be the only path to God. Such claims invariably end in confrontations with losers and winners? They produce many self-righteous and intolerant snobs. Sikhism preaches that exclusivity is the most damaging feature of any religion.

“ The world is going up in flames O Lord— shower it with Your Mercy, Save it, and deliver it from sin through whichever door (religion) humanity approaches.” (SGGS p853) [8]

It advises that we “should not call any religion inferior or false” (SGGS p1350) and thus, “give rise to controversies.” (SGGS p566)

The Sikh Gurus demonstrated the need for complete freedom of choice in matters dealing with religion and spirituality. This is clear by looking at the sacrifice performed by the ninth Guru, Guru Teg Bahadur. The ninth Guru put his life on the line for the protection of the Kashmiri Hindus and their right to freely practise their faith without hindrance, forced conversion and fear of death. See Martyrdom of Guru Tegh Bahadur for further details.

Throughout the history of religion there have been some who saw their religion as superior or the only path to God. For many of the practitioners and leaders of these religions, prostelization is a stated aim. The most benign example of this superiority complex is the missionary who often manages to do service to those they are trying to win over; at its worst the use of force--rape, torture and even murder have been condoned as tools necessary to--'free people from their backwards beliefs--for their own good'. There are even merits postulated in the next world for those who convert others to their religion by violent means.

India is famed for giving birth to several religions that have spread around the world peacefully--by setting an example of behaviors that wins new converts. Some have been like private clubs seeking no new members, clubs, which one must be born into. So sure of their religion being the 'only' correct one, they do not encourage prostlization and even restrict access to their religion's temples and Holy books, not only to strangers but even among their stratified members.

Such religious bigotry is contrary to reason, restricts freedom of thought and has often lead to inter-religious wars. Society cannot develop if all human beings think exactly alike. The human mind thrives on diversity. In almost every religion we find many factions and sects who even, in some cases, prey upon each other rather than praying with each other to the one God they all worship in common.

Sikhism preaches that a man is judged by the nobleness of his character and not by his membership or participation in any religion. Sikhs believe that nobody should be forced or coerced into any religion under pressure. If a man chooses to part with his traditional religion, he should make certain that he has something of value to replace it.

Sikhi discourages one from becoming a Sikh until he or she has developed strong feelings and commitment towards Sikhism in their studies, knowledge and relationships with Sikhs which motivates her or him to accept Sikhism--short of such surety she or he should not accept Sikhism. Therefore, before a novice is baptized as a Sikh, he/she has to beg for baptismal water with folded hands five times as every time the new initiate is reminded to follow the way of God (Waheguru Ji Ki Fateh) throughout their lifetime.

Conversion to Sikhism is through demonstration of the quality of life a Sikh lives. The Guru’s philosophy is the ideal for a Sikh to follow. In order to bring the Sikh to this ideal standard the Guru’s instruction is, “Do what the Guru asks you to do. Do not blindly copy His achievements.” The Guru expected the Sikhs’ behavior to be such as would inspire in others an urge to become Sikhs. Therefore, the only conversion that Sikhism recommends is the conversion of manners and moral behavior. Such a conversion can be better achieved through example rather than coercion.

Hinduism, Catholicism, Islam and Judaism all initiate the newborn into their parent's religion, if not at birth certainly within a few weeks. Sikhism, like many Protestant sects waits for the individual, he or she, to be old enough to make their own choice. Yet unlike many sects of Christianity, Sikhism does not hold promises of paradise or the dark-eyed houris (chaste as hidden pearls of retiring beauty) to its followers as does Islam, (the Qu'ran actually makes no such promise). The 72 heavenly virgins are from a Hadith or oral tradition. In the west this is called hearsay—he said that he said, that he said, in a long unbroken line (nearly 1400 years) to someone who is related to have heard the Rasul say it. Over the years many people invented hadiths to advance their own interests and many were executed for doing so. Today the heavenly virgins are usually touted by older men to young impressionable boys who kill themselves and innocents, presumably of the hated practitioners of any religion other than their own.

Today we can only hope our 'scientific minds given to scientific methodology' would approve the acceptance of any idea only after careful analysis and testing. Most world religions preach that acceptance of a religion does not permit verification and questioning.

Sikhism. however, preaches thorough satisfaction and a through investigation of its history and values, before accepting a religion.

The Guru says, “First, examine the merchandise carefully, and only then, make the deal.” (SGGS 1410)