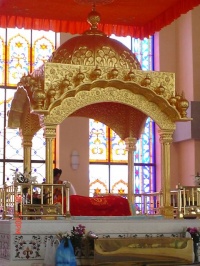 Palki Sahib is a Punjabi word which describes the structure housing the Manji Sahib and which form part of the Guru's platform (Takhat) or seating. The Palki may be integrated into the platform and form a canopy above the Guru's Manji Sahib The Palki Sahib is normally at least 2 metres wide, 2 metres deep and 2.5 metres high, made of wood and holding lighting and high decorated surfaces enhancing the Guru's seating.