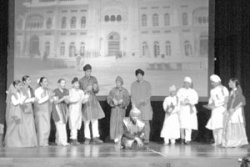 WASHINGTON D.C. - Audience of about 400 from all walks of life and faiths applauded the perfectly choreographed performance of Sikh children who staged two musical plays on Dec.13 at Wootton High School in Rockville, Md. This medium of art was employed by 30 children from ages 5 to 15 by enacting two popular American plays and they were staged in celebration of the 300th anniversary of the Sikh Scriptures, Guru Granth Sahib. The eternal truth of Sikh Scriptures was conveyed through dramatic performance by children of Guru Gobind Singh Foundation (GGSF). Both musicals Yertle & Myrtle The Tyrant Turtles and Wayward Knight emphasized the overall theme for struggle for justice and service of mankind.

The highlight of the program was interfaith presentation of quotes very skillfully and artistically woven in the fabric of play. These quotes conveyed the message of love, tolerance, harmony and peace from Guru Granth Sahib and scriptures of other world religions. Famous writer like Leo Tolstoy and statesman like Winston Churchill and Martin Luther king were also referred to.

It was an unusual experience for non- Sikh audience to see turbaned artistes depicting an American children’s story. The youth expressed themselves with Sikh costumes, Turbans, warrior attire and very grand acts of Gatka, the Sikh martial art. A character of knight dressed up like a Sikh warrior portrayed the Sikh past figures who in history stood against injustice and who were warriors for the weak.

It was a wonderful show of their talent, confidence and theatrical skill. All acts were fully coordinated and well synchronized. Two professional directors, Carmel Sanders and Pooja Chawla, had trained the children for over 4 months under watchful guidance of Dr. Harminder Kaur Mangat and Ravi Singh. Costumes and Stage were designed by Mrs. Kawal Singh. In addition, the program was interspersed by two Sikh hymns sung by Sikh children on the melodies composed by famous Sikh hymn singer, Bhai Satvinder Singh and tabla player Manjit Singh Goldy.

This unique presentation had a very noble motive. GGSF had decided to donate the profit from proceeds of donation to benefit National Children’s Medical Center and Inter Faith Conference of Metropolitan Washington. It was a great inspiration and motivation for all.

Ravi Singh, coordinator of this initiative, said “Several months back we ventured into un-chartered territory of Children’s Theatre and Waheguru’s blessings lead us to success with flying colors. What a soul-full performance by the Sikh youth ranging from 5 – 15 years in ages. They delivered the teachings of our Sikh Scriptures, Guru Granth Sahib, to help the needy, to be humble, to do service, standing for injustice, and love for everyone without any distinction or biasness, with such ease and confidence.”

Dr. Rajwant Singh, Executive Director of GGSF, said “With the goal of reaching out to the non-Sikh audience, Guru Gobind Singh Foundation formed the Rockville Chapter of New York’s award winning Children’s Theatre Company to employ the method of art. This is perhaps the first initiative of its own kind for any Sikh organization in America. This helped in removing mystery about our faith. Audience immediately felt connected to the Sikh community and Sikh ideals. I think that is the biggest achievement of this effort.”

Dr. Rev. Clark Lobenstine, Executive Director of Inter Faith, applauded this splendid cause taken by children of GGSF and said, “I am impressed and thoroughly enjoyed these presentations for these worthy causes. I am thankful to you for considering IFC and becoming an active partner in establishing peace and harmony.”

Amrit Kaur, Secretary, Guru Gobind Singh Foundation and current President of Inter-Faith Conference, said “I applaud this wonderful performance and the inherent message these children have conveyed through plays. In this time of religious extremism it is very important that where we ground our children in our own belief system we must inculcate in them the respect for other religions, spirit of harmony and tolerance for all. This is the message of Guru Granth Sahib which these children have tried to portray.”

Jan Duplain of Duplan Enterprises asked, “Where do these small children get their confidence from?” It is because they are so well rooted in their own religion, was her answer she gave herself.

Ravi Singh added, “This has been indeed a very valuable experience to help coordinate this effort. This could not have been achieved without the complete dedication of our artistic directors, the performers, the parents, and all the volunteers.”

Dr. Harminder Kaur Mangat, co-coordinator, said “I have no words to thank our team. We all were awesome. It feels like the body parts, that one could not have done without the other. These children were amazing and went far beyond expectations in giving a new meaning to communication.”

Gursean Singh, freshmen at the University of Maryland and one of the MCs at the event, said “My overall favorite moment of the evening was the Yertle and Myrtle The Tyrant Turtles performance. I believe that the utilization of a light hearted medium such as this play was an effective way of getting across a message which does not always have a positive connotation. The spirits of Guru Gobind Singh, Banda Singh Bahadur, Baba Deep Singh, and recent Sikhs such as Kartar Singh Sarabha were brilliantly shown in a manor in which children would understand. By using a children’s play as the medium, the mood is not as somber as when you learn about these figures in history classes, but the message of velour, and rising up against injustice is carried across.”

Carmel Sanders, Director of Wayward Knight, said “At first I wasn’t sure how I would be received being a person outside of the Sikh community. But I was welcomed with open arms and felt like I belonged the minute I stepped into their Temple. These young people are quite courageous. For many of them, this was their first time performing. They understood that this performance was bigger than them. This was about sharing the profound teaching of their faith with the broader community. And they did it beautifully!”

Kawal Singh, Costume and stage designer, said “It was a great pleasure to work on this project by our youth performing in the two plays. I had a lot of fun making all the costumes and creating the stage sets for these plays. I truly believe that this event has created a better understanding of who Sikhs are and what they stand for. This event has also brought our community further closer at GGSF.“

Gajinder Singh Ahuja, Secretary General of Sikh Human Development Foundation, said “Heartiest congratulations on very successful performances of the two plays. The children’s performance was superb. It was quite clear that the organizers and the children had worked very hard. The children were self-confident and seemed quite motivated. This kind of training of children not only inculcates Sikh values in the youngsters, it spreads these values across among other societies. Bringing out Gurbani teachings was very well done.”

Dr. Larry Hajime Shinagawa, Director and Associate Professor of Asian American Studies Program at the University of Maryland, said, “I wanted to express to all of you how much my family and I enjoyed the two plays and the opportunity to get to know many of you. The children and the young men and women performed with wit and warmth. I especially liked how the plays emphasized the universal principles of seeking our divine spark amongst all of us and this was doubly emphasized with the recitals of each of the children actors of the great sayings of wise persons from all religions, faiths, and walks of life.”

Barbara Harr, Director of Leadership Gifts at the University of Maryland, said, “On a deeply personal level, what a revelation this experience was for me. I must confess that I know very little about the richness of the Sikh heritage, sacrifices, and heartfelt wisdom that is so profoundly meaningful, especially in these turbulent times. I left in absolute awe of what I had witnessed. A more in depth knowledge of Sikh learning and cultural heritage will also be conducive to finding a more peaceful existence within ourselves as we face the many challenges of seeking peace around the world.”

First play - Yertle & Myrtle The Tyrant Turtles- Music and Adaptation by Lory Lazarus (inspired by Dr. Seuss) was performed by girls and boys of 6-9 ages. In this story the hero, a turtle named Mack, shows how one can stand up to pressures of power executed by the King and eventually brings down the tyrannical throne.

Second play ‘Wayward Knight’ with music and adaptation by Frank Sanchez and Mehr Mansuri, was performed by the youth of ages 10 – 18 years. This is a story of a knight who is called upon to serve the King and that is the biggest honor he can get. As he sets off on this journey he comes across various situations where many seek his aid and protection. Eventually he reaches the King, but no one in the kingdom recognizes him, and in fact he is called a thief. Finally when he meets the King, while he feels very low and humble because he did not fulfill the King’s command, the King recognizes him and honors him to highest degree of Knighthood for his good deeds, honesty and service!

Dr. Harminder Kaur Mangat said “This may seem like a very simple idea, but when the meek speak up for their own rights and that off the others, specially acted by very young kids becomes rather special. When we infuse the play with quotations from Gurbani or our Sikh history, it becomes very apparent to the world that Sikhs have always stood up for human rights. It would become easier for a child to understand and remember how and why our identity is so important because if we can stand up for others we certainly can stand up for ourselves!”

About India Journal: India Journal is the leading Indo-American Newspaper in Southern California, having been printed weekly for the last 20 years, we are the oldest and most trusted name people turn to when they need up to date information on the Indo-American community.