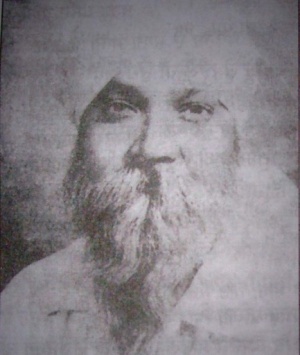 Chaudhary Lakhi Singh was born on 1 January 1902 at Tanda in Gujrat distrct of the Panjab. Chaudri lakhi Singh born from kukh of Mata Bhagwati in 1901 in tanda town in district gujrat, Pakistan. His father Chaudry Khem Singh was nambardar of the village and agent of lawyer ram singh of gujrat and was renowed man of the town. When he was child his mom left the heavnly abode his father done another marriage but the same love he didn’t get from his step mother.

He studied and passed with good marks in high school and he got the government job. He done a government job for a year and in 1923 he became the clerk of khalsa college amritsar. He use to pay obeisance to harimandir sahib. He got married after this and after one ear he got a son and also became LDC at accountant general Punjab in Lahore.

In 1925 after leaving the job of khalsa college he went to Lahore, there he took a house at madho ram da ahata in purani anarkali at Lahore and passed the family life.

He passed Adeeb fazal and BA then got post of UDC in two years. After that his wife and son died. He use to say tera bhana meetha lagae and his father diod his second marriage with BB harkaur, who was very sweet of attitude, he got a baby sumitra and a male baby called general tirlok singh, then 7 more daughters i.e satya nirmal basant and two sons brigd surinder singh and chodri balbir singh sabka minister punjab. He did B.A. and passed various degrees related to accounts. He joined service as Financial Adviser and Accounts Office in the Custodian and Rehabilitation Department in 1920. On 17 January 1960 he retired as Examiner Local Fund Punjab.

AG office From LDC he became UDC then supridentent. He wrote books of accounts and for upliftment of education and examinations he passed various amendments. He was given the throne of Accounts Officer then examiner of local fund. Chaudry sahib was fond of giving daswandh so he usually went to amritsar after month. Subha Bhola Bhala, nimarta, Mithas, Hamdardi, and sewa bhaav, has kae milna, lorhwanda de lorh pooree karni(S prem Singh his friend(1923 – 1977 both have love) . His books were sold to burma, lanka, malasiya. He got many order of books which makes him lakhpati then no ego was there

Keenly interested in the spread of education he worked as the secratary of Guru Gobind Singh Khalsa Lobana High Schools, Tanda, established a middle School named Lakhi Singh Middle School in 1931 and gave financial assistance to Lobana educational institutions. He use to pay dasvandh. Every year he use to do akhandpath in his house. Langar to poor and family. Punn Daan. He was great sewak of Sant baba Prem Singh he did much for murala dera too. Secretary needed for Guru Gobind singh lobana high school for that baba prem singh elected chaudry and he left his govenmenmt job. At school there was a road in between which was big difficulty to school but chaudry under guidance of baba prem singh went to officer nawab fazal ilahi, president district board and occupied that land. He use to bring grant for schools. Under his own aid he opened girls middle school for girls.

With the koshish of baba prem singh the labana community of Pakistan side vasi in begowal, miani mukerian etc. To open the school in tanda India fund was needed and chaudri lakhi shah transfer all the fund from the bank of Pakistan, he also prepared map for the new school and started the subh work. With chaudry babu kartar singh, zamadar mahan singh and many helped him.

An avid author he wrote many books on topics such as accounting, auditing, municipal laws, civil service regulations, fundamental and supplementary rules.

Chaudhary Lakhi Singh was close to Sant Prem Singh. He preached against social evils and unique features of Lobana culture.

After retirement, he took an active part in politics and running as an Akali candidate in 1962 he was elected as a member of the Punjab Legislative Assembly. He became MLA of tanda area and Vishvas patar of Chief kartar singh kairon. . Partap singh kairon was thinking of making him cabinet minister but on 1 – 1 1977 he left the heavnly abode and was cremated in his own house. He died on 1 January 1977 at Miani Afghanan in Hoshiarpur district.