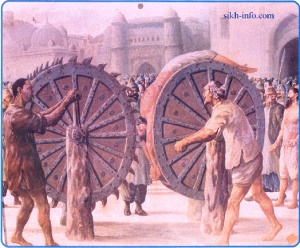 Bhai Subeg Singh (d. 1745), an eighteenth century martyr of the Sikh faith, was born to Rai Bhaga of the village of Jambar in Lahore district of Punjab. He was a zamindar of his village of Jambar. He learnt Arabic and Persian as a young man and later gained access to the Mughal officials as a government contractor. When in 1733, the Mughal authority decided at the instance of Zakariya Khan, the Governor of Lahore, to lift the quarantine enforced upon the Sikhs and make an offer of a grant to them, Subeg Singh was entrusted with the duty of negotiating with them.

He met the assembly of the Khalsa at Akal Takht, Amritsar, as the Lahore government's Vakil, a title which became a permanent adjunct of his name. For having associated himself with the government, Subeg Singh had to expiate before he was allowed to join the assembly. He communicated on behalf of the Mughal governor the offer of a jagir and nawabship which Sikhs turned down in the first instance. But Subeg Singh pleaded hard and was eventually able to bring them round to accepting the offer.

Towards the close of Zakariya Khan's regime, Subeg Singh was appointed kotwal, or police inspector, of the city of Lahore. He was by faith a staunch Sikh and had deep sympathy with his brothers in faith. On several occasions, he had had the honour of heads of Sikhs cremated with due ceremony and had monuments set up for them. Yahiya Khan, who succeeded his father, Zakariya Khan, as the governor of Lahore, turned hostile to Subeg Singh and willingly entertained complaints against him. Subeg Singh was finally charged with acts prejudicial to Islam and to the State. His son, Shahbaz Singh, was similarly arraigned. Subeg Singh was offered the choice of embracing Islam to save his life. But he refused to renounce his faith. Even when his son, Shahbaz Singh, was tied to the death wheel, Subeg Singh remained steadfast. Both uttered, "Akal, Akal" from their lips as their bodies were broken on the wheel. This was in 1745.

5. Surjit Singh Gandhi, Struggle of the Sikhs for Sovereignty. Delhi, 1980