This page is dedicated to Bhai Nand Lal's version of the Rahitnama. Originally called the Prashan Uttar (Questions and answers), it was later called Rahitnama referring to a code of conduct for those who follow Sikhism. This piece of writing was created around Decemeber 1695 along the river called the Sultaj. As one reads the conversation between the Guru and Bhai Nand Lal, we can observe the evolution of the human Guruship to the that of the holy book Guru Granth Sahib. There are many Rahitnamas out there, so this page was created to focus and study that of Bhai Nand Lal's version. This piece of work by the poet is special because this seems to be the only recored work along with Tankah Nama in which a dialogue of Guru Gobind Singh Ji was recorded. The work is created by a dialogue between Bhai Nand Lal and Guru Gobind Singh. Here many can learn the rules or codes of conduct Guru Gobind Singh wanted and the discussion of the Infinite. 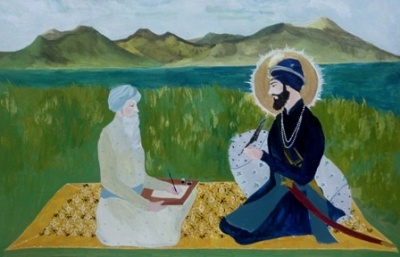 
Chaupeyi
Sikhs of the Guru, listen, My Companions,
Getting up early in the morning, conceive God in the mind.(1)
Then recite the incantation of Waheguru, the Supreme Being,
And after ablution, read and recount Jap Jaap.(2)
Then come and have the Darshan (glimpse) of mine,
And sit there reverentially with profound attention to the Guru.(3)
When the three watches of the day have gone past,
Listen to the exposition by of the Guru with complete attention.(4)
In the evening listen to the Rehras,
And pay attention to the Kirtan (singing of Hymns) and Katha(Sermons).(5)
One who practices such a way,
Will attain the eternal bliss.(6)
The Sikh who revels in five routines,
He secures the emancipation for his twenty-one generations.(7)
Not only he achieves family’s emancipation, but also eternal bliss.
He saves his soul from transmigration.(8)
Speech of Bhai Nand Lal
Dohira
What you have stated, Oh My Gurdev Master, ‘come to seek my vision,’
Please enable me to understand, how we can pursue the same.(9)
Speech of Sri Guru Jee
Dohira
Assiduously listen Nand, there are three entities of mine,
And these, you comprehend, are Transcendental, Attributive and the Guru’s Shabad, the Celestial Word.(10)
Chaupeyi
There is one Perception, which is beyond all the three attributes,
Which has been expounded many a time in Vedas,(11)
The Almighty invests every heart
And is indivisible as water in the pitcher,(12)
Deem (that) written on each of your body-hair,
And the factual pronouncement I make to you for veracity:(13)
The Sikh desirous of Guru’s Darshan,
Should go and have the Darshan of Granth Jee,(14)
After ablution early in the morning,
he should judiciously undertake its three circumambulation,(15)
Dohira
With folded hands he should be seated, seeking my audience,
And after paying obeisance to Guru Granth Jee, listen to the celestial exposition.(16)
Chaupeyi
Hearing the Shabad with concentration, and by putting mind into the Guru,
He should listen and make others heed the Guru’s enlightening Shabad.(17)
One who wants to communicate with me,
He may read, listen to and ponder over Granth Jee.(18)
Ones who aspires to listen to my sermons,
Diligently, should he read and recite Granth Jee.(19)
Deem Granth Jee as my embodiment,
And concede to no other perception.(20)
My Sikh is my third embodiment,
Who remains imbued in the essence of Gurbani day and night.(21)
One who puts confidence in and affection upon the Guru’s Shabad.
He, always and ever, achieves the vision of the Guru.(22)
He should revel in listening and recounting Guru’s Shabad,
And with full concentration read Jap Jee Jaap.{23)
He should go and espy the Guru’s Portal,
And should withstand being tempted by other women.(24)
With zeal, he should serve the Sikhs of the Guru,
After relinquish all ego from his mind.(25)
One who tends towards these actions,
Recognises my manifestation.(26)
Dohira
That Sikh of the Guru gets acceptance, who performs the service,
And the one who surrenders through mind, body and soul, and becomes prominent server of mine.(27)
The service of such a Sikh of the Guru is approved by me,
And listen, Nand, earnestly, this is the way, the heaven is secured.(28)
Speech of Nand Lal
You have expounded that Transcendental, Corporeal and Guru’s Shabad are your three attributes.
Transcendental is not visible and Corporeal is through the Sikh.(29)
Chaupeyi
Your Transcendental Attribute is infinite,
And who can have that vision, Oh My Benevolent-one.(30)
Oh, My Master, you remain the Guru of the temporal world,
And, Knowing-all, you prevail on all the minds.(31)
Speech of Sri Guru Jee
Listen, Sikh Brother, Nand Lal,
Listen earnestly to my sweet words,(32)
Guru’s Sikh becomes auspiciously corporeal,
If he is, primarily and diligently, engaged in the service of Guru.(33)
Guru’s Sikh, who conceives Guru’s Shabad,
Obtains the blessings through the embodiment of the Shabad.(34)
One who adheres to the explication through the manifestation of the Shabad,
Leads others to the Infinite one.(35)
Brother, I have narrated to you this discourse,
And the ones who read and listen to it thoughtfully,(36)
And, through my honour, the lights will merge into the light.(37)
It is Samwat Seventeen hundred and fifty-two*,
Auspicious Ninth day of first half of moon in the month of Maghar*.(38)
On a Friday at the bank of (river) Satluj,
The hero expounded these solemn verses to Nand Lal.(39)
Those Sikhs of the guru who remember Waheguru attentively,
Are endowed with salvation, remember, O Gursikh! (40)
(*December 1695CE)