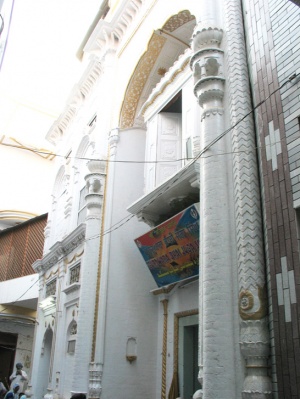 This Gurdwara is situated in Jogan Shah locality of Namakmandi of Peshawar City where Sangat of Peshawar is held in the morning and evening and Parakash of Granth Sahib takes place.

Joga was the son of Bhai Gurmukh Singh of Peshawar who was converted to Sikhism by tasting Amrit from Guru Gobind Singh. Guru Sahib took Bhai Joga as his godson and always kept him in his presence. At the request of Bhai Gurmukh Guru Gobind Singh allowed him to go to Peshawar for his marriage but to test his devotion, Guru Gobind Singh ordered another disciple to follow him. Guru Dev Ji gave him a proclamation which was to be delivered to Joga after "lawan" (Sikh rite of marriage). The note' said: "Once you see this note, proceed to Anand Pur at once." The currier did accordingly and delivered the note while he was performing Lawan. Joga Singh abruptly left without even completing his Lawan. The marriage rites were completed by giving the remaining Lawan to his belt. On the way this thought entered his mind that there could hardly be any other being who would submit before the will of Guru Gobind Singh like him. When he reached Hoshiarpur he was overwhelmed with lust when he saw the beauty of a prostitute and reached her pleasure hall. Kalghidhar disguised himself as a mace-bearer and started guarding the house of the prostitute to save his devotee from hell. Joga Singh tried to enter the house four times during the night but had to turn back as he ran into the mace-bearer every time. He set out for Anandpur. He sought forgiveness for his folly when reached the court of the Guru. The Gurdwara is constructed as a beautiful 3- storeyed building. Prakash of Guru Granth Sahib takes place and local and foreign sangats meet daily. There is a Punjabi school for Sikh children which imparts secular education alongwith the religious education.