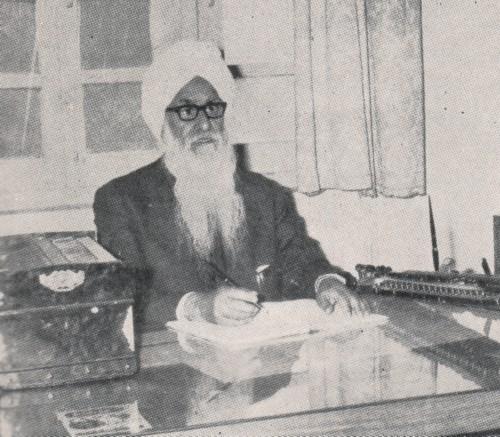 Gian Singh Ji was born in 1897 in Abbotabad, now in Pakistan, into an affluent family. His father, Sardar Bhagwan Singh Ji, was fond of Kirtan and started teaching his young son to sing. By the time he was thirteen, Gian Singh Ji was quite adept at singing Gurbani Kirtan. He would seek out Ragis and Rababis and with their help master the old Gurmat Sangeet melodies that their families had preserved over the years. Gian Singh Ji was an enthusiastic participant in the Gurdwara Reform movement and a member of the early Shiromani Committee.

After the partition of India in 1947, Gian Singh Ji left Abbotabad and came to Delhi, where he quickly re-established himself as a businessman. In Delhi he embarked upon the task of documenting the seminal melodies that he had learned over his lifetime. While Gian Singh Ji had colleted a large repertoire of shabad compositions, he was no musicologist. He engaged the services of a Rababi called Bhai Taba Ji and a young Dilruba player, who used to accompany Bhai Samund Singh Ji and had served at Sri Harmandir Sahib as well. Employing the notational system created by Pandit Vishnu Narayan Bhatkhande, with the help of Bhai Taba ji and the young Dilruba player and musicologist, Gian Singh Ji completed the monumental task of documenting 309 Shabads, that embody the essence of Gurmat Sangeet.

Volume 1 of Gurbani Sangeet contains 192 shabads in 60 Ragas of the Sri Guru Granth Sahib. (Yes indeed, that is not a mistake; the Guru Granth Sahib has more than 31 Ragas, but that is a subject for another article). Volume 2 contains 117 shabads in 59 additional Ragas, which have traditionally been used for Gurmat Sangeet compositions.

The young Dilruba player and musicologist was none other than Gyani Dyal Singh Ji, who runs the Gurmat Vidyalaya at Gurdwara Rakab Ganj Sahib.