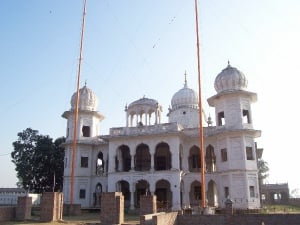 Gurdwara Damdama Sahib, this is where Guru Hargobind took a rest after the Battle of Hargobindpur

Guru Hargobind, the sixth Sikh Guru fought five defensive battles in his lifetime against Mughal chieftains and won all of them. His war strategy was to challenge the Mughal Generals and fight with them directly and so avoid bloodshed of masses. Even then numbers of brave Sikhs and Mughal soldiers were killed because no General wanted to face the Guru alone. The battles fought by the Guru are: