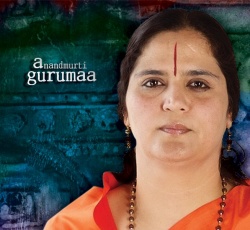 Anandmurti Gurumaa was born Gurpreet Kaur Grover on 8th of April 1966 at Amritsar in Punjab India; a convent educated arts graduate but master of life and beyond. She had been a mentor, guide to people around her right from her school times. She says, 'A rose is born rose, not does something to be a rose.' Her house was always being visited by spiritually evolved people. When at an early age of fifteen she went for pilgrimage and was surrounded by admirers and seekers, it was never a surprise for the family. She travelled through her teens and by age of twenty four had settled in Rishikesh in her hermitage.

But soon her work spread and now she is based in Gannaur, Sonepat, Haryana. Where she is available to her disciples year around where various residential workshops are organized. Her ashram is a beautiful place with beauty and empty spaces to rejoice and evolve spiritually.

She is the second of four siblings — one son and three daughters — of an affluent family which originally migrated from Gujranwala, Pakistan on Partition (in 1947) and her father set up a lucrative transport business in India. Her original name was Gurpreet Kaur Grover. She went to a convent and then to Government College for Women, from where she took a degree in arts. Right from the age of 15, she was more interested in religion than in other subjects. She attended discourses given by different religious teachers till she met Sant Delawar Singh, who gave her diksha and her new name, Anand Murti Guruma.[1]

Anandmurti Gurumaa showed extraordinary signs of a mystic in the making early in life. From the very beginning she was being blessed by mystics and sages right at her home. From the tender age of nine, Gurumaa would put such questions before her school teachers and others that they would be surprised by her sharp intellect and deep insights in spirituality. Those around her felt it remarkable that a child of her age could put such questions.

Gurumaa received her education from a convent school. Once it so happened that a missionary came to her school to deliver a talk on moral science. Gurumaa stood up and asked the missionary: Who is God? Have you experienced His presence? Are you reading about God from the scripture or are you saying what comes from your own experience? The missionary did not answer her questions but went straight to the Principal. When Gurumaa and her parents were called to the Principal's office, the missionary requested that their child with her exceptional abilities be trained to spread the message of Christ.

From early age, Gurumaa showed a special affinity towards the seers. She would listen to their talks and ask them various questions. They would happily answer all her queries as they knew she was not asking from curiosity alone. Gurumaa also started writing poetry at an early age. These poetic expressions came from the depth of her heart. They are her innocent offerings to the divine where the divine is seen as the beloved and sometimes as friend.

Gurumaa had also begun in her own way to deliver satsang even when she was in school. After school was over, she would rush to a place where she would deliver her satsang. People were drawn to her and made every endeavour to be a part of that Amrit Varsha.