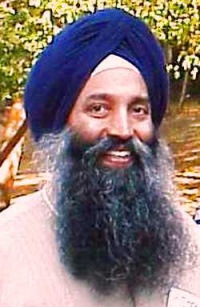 Ajmer Singh Malhi (B 1951- Jan. 23, 2000) was a mathematics teacher at Skyline High School in Oakland, California. He was also a Union Activist and served as Treasurer and Chief Negotiator for the Oakland Teachers Association (OEA). He was also a well-known leader in the Sikh community and secretary at the ‎Gurdwara Sahib Sikh Temple in El Sobrante, California.

On the afternoon of January 23, 2000, around 1:45pm just before services were to end, Ajmer was shot and killed in front of the congregation by 30 year-old Joga Singh Sandher, a limousine driver in the Union City area. Sandher told police he was incensed by Ajmer Malhi's refusal to let him address the congregation and felt it was his religious duty to correct this wrongdoing. Allegedly earlier that morning Sandher approached Malhi to give him time for addressing the congregation and tell them how he had come to re-embrace Sikhism after his father's death.

Due to time constraints Malhi denied him the opportunity. Sandher however felt Malhi was lying and became enraged. After their conversation, Sandher left the temple to retrieve an assault rifle from the trunk of his limousine. When he came back inside the temple he began shooting. Malhi tried to escape by running around a ceremonial stage inside the prayer hall, but Sandher chased him down and fired a round into his head, killing him, authorities said. A 38 year-old worshipper was also shot in the leg, but the injuries were not life threatening.

A Contra Costa County judge ruled on October 2nd 2001 that Joga Singh Sandher was not mentally disabled when he shot and killed Ajmer Singh Malhi. During the murder trial, witnesses told the judge that Sandher had become emotionally unstable after his father died in November 1999. A psychiatrist testified that he suffered from a delusional disorder. Sandher, who up until that point had visited temples infrequently, became obsessed with Sikhism, witnesses said. Prosecutor Tom O'Connor said Sandher's erratic behavior could at least in part be attributed to his use of alcohol and methamphetamine.

There was speculation that Malhi denied Sandher's request because Sandher once sounded incoherent and unfocused during a speech when he was previously allowed to address the congregation. There was also speculation that Malhi was targeted because he was a supporter of the Khalistan movement (a movement started in the 1970's to create a Sikh state in India known as Khalistan) and his murder was connected with clashes between fundamentalists and moderates, but members of the Gurdwara said that politics played no part in the killing.

A friend of Balbir Singh Sodhi

Ironically, Ajmer Malhi, a peaceful man by many accounts, was friends with another notable member of the Sikh community that was also violently murdered. Balbir Singh Sodhi was a peace loving member of the Arizona Sikh community that was killed after the September 11th terrorist attacks, because he had been confused with a person of Middle Eastern ethnicity because of the clothes he wore, his turban, and his beard.

On September 30, 2003, Frank Roque, was convicted of first-degree murder and on October 10, dismissing defense claims of diminished mental responsibility (Roque had a history of schizophrenia and of hearing voices), he was sentenced to face the death penalty. In August 2006, the Arizona Supreme Court overturned Roque's death sentence in return for a sentence of life in prison. His low IQ and history of mental illness were mitigating factors in the reversal. Sodhi's family, with some reservations, accepted the court's decision.

On August 4, 2002, less than a year after Balbir's death, his younger brother Sukhpal was shot to death while driving his taxicab in San Francisco, apparently killed by a stray bullet from a nearby gang fight. Balbir's son, Sukhwinder said, "What are you going to do with anger? We like peace and we are a peaceful people." (wikipedia)

Though the sources for this info come from several newspaper articles, the current writer also used info posted on the net by someone named Weldon on a Site called Find a Grave. The Grave site was listed as unknown. I guess his knowledge of Sikh funerals would also fall into the unknown category.