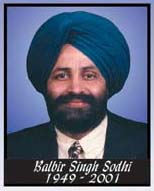 Balbir Singh Sodhi (1949 - September 15, 2001) was a Mesa, Arizona, Service Station owner who was murdered in the aftermath of the September 11, 2001 attacks. His death made national and international headlines because his was the first of several cases across the United States that were reported to the police as acts of retaliation for the terrorist attacks. According to family members, Singh Sodhi had been distraught because of the terrorist attacks.

Born in Punjab, India, he was a member of the Sikh religion. He moved to Los Angeles in 1989, where he worked as a taxi driver. He later relocated to San Francisco, where he continued to work in that capacity. He saved enough money to buy a gas station in Phoenix, and then he moved there.

On September 15, 2001, while planting flowers outside his Mesa convenience store, he was shot five times by a gunman and died instantly. Apparently, he had been confused with a person of Middle Eastern ethnicity because of the clothes he wore, as well as, his turban and his beard. Within 25 minutes of his death, the Phoenix police reported four further attacks on people who either were Middle Easterners or who dressed with clothes thought to be worn by Middle Easterners. His senseless death shocked many Americans and the US Congress moved quickly to condemn such acts of violence aimed at Sikhs by ignorant vigilantes.

His killer, Frank Roque 44, who had shouted, "I am a patriot" while being arrested, was convicted (September 30) of first-degree murder in the Singh case. On October 10, dismissing defence claims of diminished mental responsibility (Roque has a history of schizophrenia and of hearing voices), jurors at Maricopa County Superior Court sentenced him to face the death penalty. In August 2006, Arizona Supreme Court overturned Roque's death sentence in return for a sentence of life in prison.

On August 4, 2002, less than a year after Balbir's death, his younger brother Sukhpal was shot to death while driving his taxicab in San Francisco, apparently killed by a stray bullet from a nearby gang fight. In response to this second tragedy, Balbir's son, Sukhwinder said, "What are you going to do with anger? We like peace and we are a peaceful people."