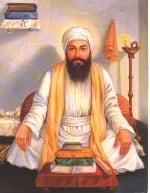 Bhai sahib following in the footsteps of Guru Nanak, who was the first Sikh Guru and founder of the Sikh religion became the second Sikh spiritual master on September 18 1539.

Guru Angad Dev was born on April 18, 1504 and this auspicious day is doubly celebrated by the Sikhs every year together with the birthday of their ninth master, Guru Tegh Bahadur born on April 18 1621.

The institution of langar was given prominence and further maintained and developed during the Guruship of the second master. The Guru's wife, Mata Khivi personally worked in the kitchen to prepare the food and guide others in managing this important function.

She also served food to the members of the community and visitors. Her devotion to this institution finds mention in Guru Granth Sahib, the holy book of the Sikhs.

Guru Angad also invented the present form of the Gurmukhi script. It became the medium of writing the Punjabi language in which the hymns of the Gurus are expressed. .....More