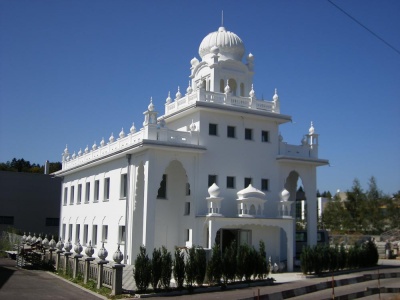 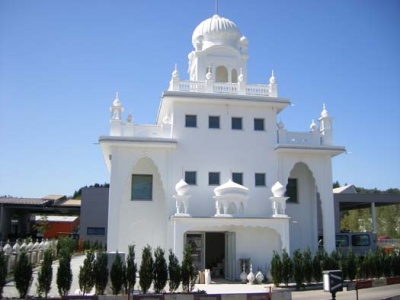 This page is currently being composed from the Sangat's press release on their web site. Please feel free to help with its editing.

Gurdwara Sahib Switzerland was not built in few weeks, months or years, as it took a decade to come into existence. From its beginning in 1996, when it took almost two years to attain to attain the necessary legal permission, to the ceremony marking the actual beginning of construction, when Bhai Harjinder Singh Ji (Srinagar wale) made a special effort, flying into Switzerland to grace the occasion (25th October 2002).

The foundation stone of Gurdwara Sahib was laid on 11th January 2001. The ceremony was headed by the Punj Piaras (the five beloveds). The extensive media coverage proved to be a milestone in gaining recognition for Sikhs throughout Switzerland. Waheguru (Almighty God) helped the Sangat in solving the many common obstacles; financial, legal, even hatred and conspiracies from those who knew little about the Sikhs and their path of peace and service. some were faced during this period.in construction period of Gurdwara Sahib. All sorts of obstacles like financial, legal, hatred and conspiracies by some were faced during this period.

On that auspicious day the all important announcement that “GOD has bestowed HIS blessings on S. Dharam Singh of Village Bhungarani, Punjab to do the SEWA of land (purchased land) required for Gurdwara Sahib” The Sikhs of Switzerland were filled with joy on hearing this announcement. The then mayor of Langenthal Mr. Hans Jürg Käser was present on this particular occasion also. There was an extensive press and media coverage of this occasion also. The last and most crucial phase of this project was the construction of domes of Gurdwara Sahib. For this purpose also, permission from authorities was required. By the kind blessings of Almighty GOD, the Sikhs of Switzerland got this permission without any major hiccups. The construction of domes was started on a chilly morning of beginning of 2004. Another fact which needs to mentioned that the Sikhs of Switzerland neither gave up their efforts up nor loose their determination and commitment right from 1996 to 2006 despite all sorts of obstacles. They put in their best efforts to achieve the aim of completing Gurdwara Sahib. The palatial building of Gurdwara Sahib, Switzerland as it stands now is a testimony to the untiring efforts of Sikhs of Switzerland. While Sikhs of Switzerland were on the forefront to complete their mission, who can forget the valuable contributions made by Sikhs from allover the Europe. It would have been very difficult to accomplish this mission without their contributions.