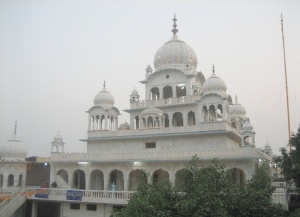 Gurdwara Manji Sahib at Pinjaur is associated with the first guru, Guru Nanak Dev Ji who visited this place during his third udasi (travels) in 1517. There was a big jungle here at that time in which a group of yogis practised Hatha Yoga at the nearby Dhara Mandap. Guruji impressed upon them the futility of self-torture and renunciation as a means to salvation.

He uttered the Asa Di Var shabad, likh likh padia tota kadia, here. He is also said to have cured the hands of the Tunda Raja by sprinkling water from the sacred baoli. The baoli still exists here where first a small Manji Sahib (platform) existed on the spot until Patiala ka Maharaja Karam Singh (1798-1845) had the present gurudwara constructed. The famous Mughal gardens of Pinjaur were renamed the Yadavindra Gardens in honour of the last ruler of the area Maharaja Yadavinder Singh of Patiala upon his death in 1974. 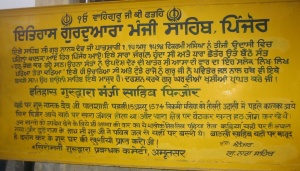 Gurdwara Manji Sahib is situated in the Main Bazaar, Pinjore just North of Chandigarh on the Chandigarh Simla Road, near the Pinjore/Yadavindra Gardens Gardens.

A local committee, under the overall control of the Shiromani Gurdwara Parbandhak Committee, manages the site.