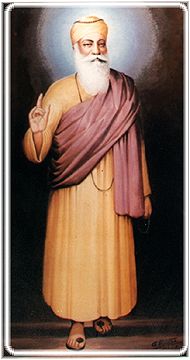 Gurbux Singh Theathi was born in Punjab on the 10th of November 1923. He did his matriculation in 1939 and that very year joined S. Hari Singh, a well known and a highly talented artist, as an apprentice. In 1941 he enrolled in the Lahore College of Arts and completed a one year course in Commercial Art and drawing.

In 1942 he joined Calico Printing Association Punjab as an assistant designer to Mr. H. Chakarvarti, Chief Calico designer, who had qualified from Japan in textile designing.

In 1947 he joined the Indian Army on short service commission in the Army ordinance core.

In 1950 he joined a decorating firm as a designer and decorator, and that same year he set up a small studio of his own in New Delhi, specialising in designing of publications, mythological, religious and general pictures for calendars and cinema posters. In 1960, he was invited by the American Embassy in Delhi to work as their main designer for their immense exhibitions, which included book publications, charts and audio visual material. He remained with the Embassy for 12 years and in 1972 took voluntary retirement to work for another advertising agency in designing adverts for newspapers and periodicals. He worked here until 1981.

It was in 1982 that he was sponsored to come to England to attend the International Sikh Festival held that year. His task was to paint 16 large paintings of Sikh Gurus and make a model of the Golden Temple in wood. The large pictures were hung on the sides of large floats for a procession held in London. The model of the Golden Temple was also displayed on a float leading the procession.

He returned to England in 1983 having been sponsored by Ramgarhia Sabha, Southall, to paint 50 paintings of various Gurus and saints in various sizes. These paintings are now an attractive part of the Gurdwara and are on permanent display in the foyer. A magazine depicting all the paintings displayed has been printed by the Sabha with a full history of the Gurdwara and the paintings (Treasures of Sikh faith - Paintings of S. Gurbux Singh can be seen in this brochure). To date, students of different backgrounds from schools, colleges and universities have visited the temple from all over U.K. in order to view the Paintings, which help them in their studies of world religions.Most Gurdwaras in U.K. display paintings of this versatile artist. Coventry Ramgarhia Gurdwara also has more than fifty paintings done by Mr. Theathi, which are adorning the temple hall.

He returned to India in 1983, and until 1987 worked as a freelance artist mainly painting for Museums. The subjects were Hindu Mythology and Sikh History. He returned to U.K. in 1987 and as a freelance painter, painted for various communities at temples, Gurdwaras, community centres and private venues.

A very interesting mural was painted by him depicting -History of Southall-, which was highly acclaimed by the then leader of the Labour Party Rt. Hon. Neil Kinnock, and stands as a gesture to this great artist. His paintings in certain restaurants and Hotels also capture the romantic moods of myth and romance.

In 1996 he received a prestigious award of the "Asia Films Awards 1996", which was indeed a feather in the cap of this prolific painter.

S. Gurbux Singh Theathi has been awarded the "Sobha Singh Award" by the Khalsa Award Committee of Canada.