Difference between revisions of "Funds raised for Sikh family" 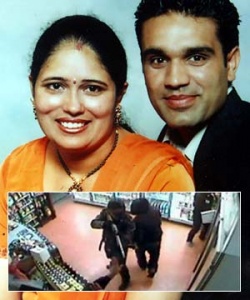 PARTED COUPLE: A family photo of Navtej Singh, who died after he was shot in a liquor shop robbery, and his wife, Harjinder Kaur. Inset: a still from the security footage of the shooting.

More than $13,000 was raised for the Sikh family of murdered Manurewa liquor store owner Navtej Singh at a benefit in Manukau City last night.

The money was raised at a special screening of the film Apron Strings at the Berkeley Cinema.

The film, by New Zealand Samoan director Sima Urale, is set in South Auckland and features a Sikh and a Pakeha family and a diverse production team and cast. Sima Urale told the audience that the screening was a "gift" to the family.

Mr Singh, 30, was shot in the chest with a.22 calibre rifle during a raid on his Manurewa store on June 7 and died the next day.

Race Relations Commissioner Joris de Bres said he had been approached by Film Commission chief executive Ruth Harley about a benefit screening because the film dealt with issues of anger, violence, grief and prejudice but ended with hope.

Mr de Bres said that like the hui at Manurewa marae earlier this month, where Te Hapu o Tupango hosted members of the South Auckland Asian community, the event showed how communities in South Auckland were taking responsibility to address issues sparked by the tragic death of Mr Singh.

"The right to safety is a fundamental human right that we are all responsible for upholding," he said after the screening.

"The full house and the response of the audience tonight show that the communities of South Auckland value a tolerant, inclusive, diverse and above all safe community."

Seven men have been charged in connection with the shooting and have been remanded for a pre-depositions hearing on September 10, six in custody and one on bail.