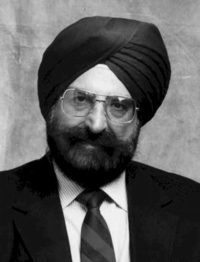 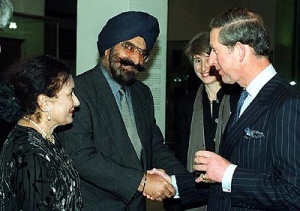 Born in India and educated in England, Dr. Narinder Singh Kapany has lived in the United States for forty-five years. A graduate of Agra University in India, he completed advanced studies in optics at the Imperial College of Science and Technology, London, and received his Ph.D. from the University of London in 1955.

His career has spanned science, entrepreneurship and management, academia, publishing, lecturing, and farming. His personal interests include philanthropy, art collecting, and sculpting.

As a scientist, Dr. Kapany is widely acknowledged as the father of fiber-optics. His research and inventions have encompassed fiber-optics communications, lasers, biomedical instrumentation, solar energy and pollution monitoring. He has over one hundred patents, and was a member of the National Inventors Council. He has received many awards including 'The Excellence 2000 Award' from the USA Pan-Asian American Chamber of Commerce in 1998. He is a Fellow of numerous scientific societies including the British Royal Academy of Engineering, the Optical Society of America, and the American Association for the Advancement of Science.

As an entrepreneur and business executive, Dr. Kapany has specialized in the processes of innovation and the management of technology and technology transfer. In 1960, he founded Optics Technology Inc. and was Chairman of the Board, President, and Director of Research for twelve years. In 1967 the company went public with numerous corporate acquisitions and joint-ventures in the United States and abroad. In 1973, Dr. Kapany founded Kaptron Inc. and was President and CEO until 1990 when he sold the company to AMP Incorporated. For the next nine years, Dr. Kapany was an AMP Fellow, heading the Intrapreneur & Technical Expert Program and serving as Chief Technologist for Global Communications Business. He recently founded K2 Optronics. He has also served on the boards of various companies. He was a member of the Young Presidents Organization and is presently a member of the World Presidents Organization.

As an academic, Dr. Kapany has taught and supervised research activity of postgraduate students. He was a Regents Professor at the University of California, Berkeley (UCB), and at the University of California, Santa Cruz (UCSC). He was also Director of the Center for Innovation and Entrepreneurial Development (CIED) at UCSC for seven years. At Stanford University, he has been a Visiting Scholar in the Physics Department and Consulting Professor in the Department of Electrical Engineering.

As an author and lecturer, Dr. Kapany has published over 100 scientific papers and four books on opto-electronics and entrepreneurship. He has lectured to various national and international scientific societies.

As a philanthropist, Dr. Kapany has been active in education and the arts. He has been the founding chairman and major funder of the Sikh Foundation and its activities for over 30 years. In collaboration with international institutions and publishers, the Foundation runs programs in publishing, academia and the arts. In 1998, Dr. Kapany endowed a Chair of Sikh Studies at the University of California, Santa Barbara. His gift in 1999 of $500,000 to the Asian Art Museum of San Francisco will establish a gallery in its new building displaying the works he has donated from his collection of Sikh art. In 1999, he endowed a Chair of Opto-Electronics at the University of California, Santa Cruz. He is also trustee of the University of California, Santa Cruz Foundation. He has served as a trustee of the Menlo School in Menlo Park, California.

As an art collector, Dr. Kapany has specialized in Sikh art. He was the prime mover and a provided a major loan of paintings for the internationally acclaimed 'Arts of the Sikh Kingdoms' exhibition. The exhibition started in March 1999 at the Victoria & Albert Museum, London, proceeded to the Asian Art Museum of San Francisco with the Sikh Foundation as its major sponsor, and opened in May 2000 for four months at the Royal Ontario Museum in Canada. The exhibition follows 'Splendors of the Punjab: Sikh Art and Literature in 1992' organized by Dr. Kapany in collaboration with the Asian Art Museum and UC Berkeley to celebrate the 25th anniversary of the Sikh Foundation.

As an artist, Dr. Kapany has created 40 "dynoptic" sculptures which were first displayed in a one-man show at the Exploratorium of the Palace of Fine Arts in San Francisco in 1972. Since then, the collection has been viewed at museums and art galleries in Chicago, Monterey, Palo Alto, and Stanford.

Dr. Kapany lives in the Bay Area with his wife, Satinder. His son, Rajinder, is a hi-tech executive; and his daughter, Kiren, is an attorney and filmmaker

Dr. Narinder Singh grew up in Dehradun of northern India. While a schoolboy there, a teacher scolded him that light could only travel in a straight line. Singh disagreed and set out to prove the status quo wrong. The result of his life's work was the creation of fiber optics.

Singh states, "It became an obsession of mine to bend light around corners." He began to use a series of prisms lined up to move beams of light, but the light itself still traveled in a straight line between the prisms. Continues Singh, "That got me thinking about using cylindrical geometry instead. The initial impetus for my work was to develop a 'flexible fiber scope', the idea to use it as an instrument for doctors to look into the body."

In July 1952, Harold Hopkins and Narinder Singh began developing bundles of glass fibers for use as an endoscope under a grant from the Royal Society of England. It became clear that the cutting-edge research conducted by their team was sure to garner broad respect and congratulations from the scientific field. Unfortunately, the next spring Hopkins told Fritz Zernicke of the fiber bundles he and Singh were developing, and in turn, Zernicke told another researcher named van Heele. In order to steal the credit, van Heele rushed publication and managed to submit a brief paper about clad fiber to Nature magazine by June of 1953.

As a result, in January 1954 Hopkins, van Heele, and Singh all published competing papers in Nature. van Heele reported on simple bundles of clad fiber, while Hopkins and Singh described bundles of unclad fibers that could successfully transmit images. After this incident, Singh moved to the University of Rochester.

In 1956, Singh completed work on his new invention of a glass-coated rod. This special rod eliminated the biggest problem that hindered previous scientists - it provided a means to protect the beam of light from environmental obstacles. Singh was also the one who coined the phrase 'fiber optics', and became known as "the father of fiber optics". Since then, Singh's further research and inventions have leapfrogged the fields of fiber-optic communications, lasers, biomedical instrumentation, solar energy, and pollution monitoring to new levels. He is credited with over a hundred patents, and has also published four books.

A Regents professor, Singh has taught at the University of California - Santa Cruz, Berkeley, and also in Stanford University's Department of Physics and Department of Electrical Engineering. In 1998, Singh endowed a Chair of Sikh Studies at the University of California - Santa Barbara. In 1999, he donated $500,000 to the Asian Art Museum of San Francisco, and endowed a Chair of Opto-Electronics at the University of California - Santa Cruz. Comments Dr. Singh, "The teachings and exemplary lives of the ten Sikh gurus from Nanak to Gobind Singh are our beacons. Guru Tegh Bahadur set the supreme secular example when he laid down his life for the freedom of other religions. We are further inspired by five centuries of artistic and intellectual achievements, and by the Sikh men and women who led the movement for India's independence. We also need to ensure that our friends of other faiths, races, and cultures understand who and what we are. We must present the beauty of our heritage without chauvinism - the wisdom, philosophy, and arts of the Sikh faith belong to the world, and it is time now to bring them into the light."