Difference between revisions of "Chittagong, The Gurdwara Sikh Temple" 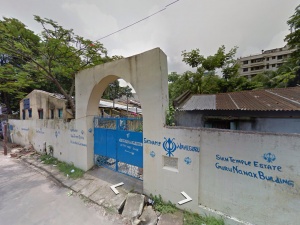 Chittagong (22Â° 21`N, 91Â° 50`E), a major port town of Bangladesh, situated on the right bank of the Karnaphuli River, 20 km from the river's mouth, has a historic Sikh shrine, called Gurdwara Sikh Temple, dedicated to Guru Nanak, who is believed to have stayed here briefly in 1507-08.

Local tradition connects this Gurdwara with the story of the conversion by Guru Nanak of Bhai Jhanda Badhi, Raja Sudhar Sen and his nephew, Indra Sen. The story occurs briefly in the B40 Janamsakhi and at some length in the BalaJanam Sakhi. The Gurdwara Sikh Temple is situated in the middle of Chowk Bazar. An old well adjoining it is still in use. There is some property in the name of the Gurdwara donated to it by Bhai Mohan Singh, a Sikh who was Diwan of Chittagong during the rule of Nawab `Ali Vardi Khan (d. 1756).

The Gurdwara was administered by a line of Udasi priests until 1917 when the management was entrusted to a committee of local devotees under the chairmanship of the district judge of Chittagong. This arrangement still continues.