Colonel Alexander Houghton Gardner, also spelled Gardiner (1785-1877), was a Scottish-American mercenary, who at times commanded units of Ranjit Singh's artillery forces. He often wore a uniform befitting a Scottish Highlander, including a tartan turban. In his late years he was a pensioner of Maharaja Gulab Singh's Kashmiri Government.

…He lived to a ripe old age, well into his 90's, for a time he opened a shop shop in Srinagar, Kashmir's capital. He entertained nearly every traveler and explorer who came through Kashmir on the way to the north and west. Very little is known about his life, as many of his stories were discounted by contemporaries, He did write a book after Singh's death, "The Fall of the Sikh Empire", reprint copies of which may be found after diligent search. If his stories are true, Gardiner explored more of the Hindu Kush, the Pamirs and the otherwise unknown and forbidden western Himalaya than anyone before him, and his travels were not equaled in scope for half a century. His problem was, he didn't explore to explore, he just tried to stay one step ahead of whoever was chasing him. Let's just say not all of his behavior was exemplary...here is a picture of him during the service to Singh, surrounded by other members of the Sikh army. 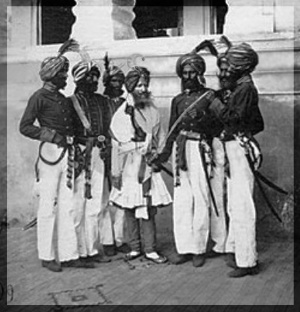 In 1883 Sir Henry Durand wrote an article on Gardiner, "A Soldier of the Olden Time." In 1898 Major H. Pearse published a memoir entitled, "Alexander Gardiner, Traveller and Soldier" Both works were based on the elderly Gardiner's memories. He reported keeping a dairy while working for the Khalsa the major portion of which was loaned to Alexander Burns who was murdered at Kabul in 1841. Gardiner also told of letters he had lost, after carrying for years and General George Washington his father's friend. According to Gardiner his father was a Scottish Physician who had moved fron Scotland to the American Colonies where he fought against the British in the American Revolution.

G. Grey in his book, European Adventures Of Northern India, 1785 to 1849, describes Alexander Gardner as a fake calling his Memoirs fictitious. He credits Claude Auguste Court as the "architect of Sikh artillery."

European Adventures Of Northern India, 1785 to 1849, first published in 1929 and reprinted by the Languages Department, Punjab, Patiala, in 1970.