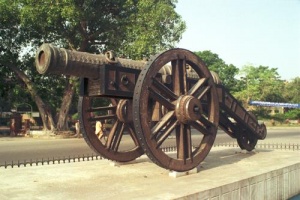 The gun belonging to the Bhangi misl, known as Zamzama

BHANGIAN DI TOPH or the gun belonging to the Bhangi Misl, known as Zamzama, is a massive, heavyweight gun, an 80 pounder, 14 feet, 4½ inches in length, with a bore aperture of 9½ inches, cast in Lahore in copper and brass by Shah Nazir at the orders of Shah Wali Khan, the wazir of Ahmad Shah Durrani. In English literature, it has been immortalized by Rudyard Kipling as Kim's gun. It is perhaps the largest specimen of Indian cannon casting, and is celebrated in Sikh historical annals more as a marvel of ordnance than for its efficiency in the battlefield. Yet for its effectiveness it has been called "a fireraining dragon" and "a gun terrible as a dragon and huge as a mountain." The casting of this gun cost the Durrani invader almost nothing. A jizyah or capitation cess was imposed on the Hindu and Sikh families of Lahore in 1760 by Shah Wali Khan requiring them each to contribute a copper or brass vessel for the manufacture of a cannon. Afghan and Indian ordnance manufacturers set to work, under the supervision of Shah Nazir, on casting the metal thus collected into a cannon, which according to the local chronicles of Lahore was completed before 1761. The gun was used in the third battle of Panipat in 1761.

Being too cumbersome to move, Ahmad Shah left it with Khwaja Ubaid, the governor of Lahore. In 1762, the Bhangi chief, Hari Singh, attacked Lahore and took possession of the cannon. It then came to be known as Bhangian di Top. It remained in the possession of the Bhangi Sardars, Lahina Singh and Gujjar Singh till 1764, when the Sukkarchakkia chief, Charhat Singh, who had assisted the Bhangis in the capture of Lahore, claimed it as his share of the spoils. Charhat Singh had it carted to Gujranwala with the help of 2,000 soldiers. Soon afterwards, the Chatthas of Ahmadnagar wrested the cannon from the Sukkarchakkia Sardar. A feud arose over its possession between the two Chattha brothers, Ahmad Khan and Pir Muhammad Khan. In the ensuing battle between the claimants two sons of Ahmad Khan and one son of Pir Muhammad Khan were killed. Gujjar Singh Bhangi, who had helped Pir Muhammad Khan against his brother, took the cannon to Gurjat. In 1772, the Chatthas recovered it and removed it to Rasulnagar. It was captured by Jhanda Singh in 1773 and carried to Amritsar.

In 1802, when Maharaja Ranjit Singh occupied Amritsar, the cannon fell into his hands. Contemporary chroniclers of Ranjit Singh's reign, particularly Sohan Lal Suri and Bute Shah, record that the Bhangis used the Zamzama in the battle of Dinanagar which they fought against the joint forces of the Kanhaiyas and the Ramgarhias. Ranjit Singh employed it in his campaigns of Daska, Kasur, Sujanpur, Wazirabad and Multan. It was transported to Multan in a specially built carriage during the siege of the citadel in 1810, but it failed to discharge. In April 1818, it was again taken to Multan with reinforcements under Jamadar Khushal Singh, but its shells proved ineffective against the thick walls of the fortress.

In these operations, the cannon was severely damaged and it had to be brought back to Lahore, unfit for any further use. It was placed outside Delhi Gate, Lahore, where it remained until 1860. When in 1864, Maulawi Nur Ahmad Chishti compiled the TahqiqatiChishti, he found it standing in the Baradari of the garden of Wazir Khan, behind the Lahore Museum. During the years following the British occupation of the Punjab, many a legend grew around this massive relic of the Sikhs' victory over the Afghans. In 1870, it found a new asylum at the entrance of the Lahore Museum, then located in the Tollinton Market. When the present building of the museum was constructed it was removed further west and placed opposite the University Hall Repaired in 1977, the cannon now rests opposite the Institute of Chemical Engineering and Technology of the Panjab University at Lahore.

The cannon bears two Persian inscriptions. The front one reads: "By the order of the Emperor [Ahmad Shah], DuriDurran, Shah Wali Khan wazir made the gun named Zamzama or the Taker of Strongholds." The longer versified inscription at the back eulogizes its bulk and invincibility. "A destroyer even of the strongholds of the heaven." The following verses at the end of the inscription contain a chronogram: From reason I enquire of the year of its manufacture; Struck with terror it replied, "Wert thou be willing to surrender thine life, I wouldst unfold unto thee the secret." I agreed, and it said, "What a, cannon! 'Tis a mighty fire dispensing dragon!"