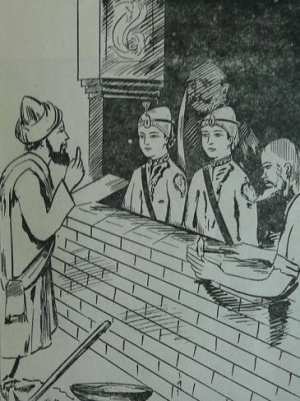 Hakim Allah Yaar Khan Jogi, was an unbiased Muslim poet/writer wrote two poems almost a century ago, one on Chamkaur, under the title Ganj-a-Shaheedan and the other on Sirhind, entitled Shaheedan -a-Wafa. His ancestors were from Deccan, but he was settled in Anarkali, Lahore. He used to wear royal Achkan n Salwar, was tall, of strong built, with a small moustache and khaskhasi beard. All in all, he looked like an Iranian mir.

The poems were in the form of a homage on the heart rending tragedies of Chamkaur and Sirhind. Ganj-a-Shaheedan appeared in the year 1913 and both appeared collectively from Lahore in the year 1915. The valour displayed by the young sons of Guru Gobind Singh has been sympathetically and vividly narrated in the poems of a devout Muslim, Allah Yaar Khan. The cruelty of their murder and their fearlcssness of death which they preferred to giving up their faith finds a touching narration in "GarijiShahTdari" by Allah Yaar Khan Jogi, who used to recite it from Sikh platforms during the second and third decades of the twentieth century.

Jogi Allah Yaar Khan just loved Guru Ji and with love wrote so much about Guru Ji that Muslims became very jealous, called “kafir” (unbelievers) and did not allow him to enter a Mosque for 30 years.

When he had become an old man, a Qazi went to his house and said to him, “Jogia, come with me and ask for forgiveness. You have grown old and should die as a true Muslim.” Allah Yaar Khan said, “I have done nothing wrong. What I wrote about Guru Ji is the truth and I will not go back.” Hearing this the Qazi got mad and said, “Then you wanna die as a kafir?” Yaar khan replied, “I am kafir from Mohammad but not for Guru Gobind Singh Ji. I see Guru Ji sitting in Bahishat (heaven) with open arms and waiting for me. I want His love and want to die as Guru Ji’s servant.” Qazi left and Allah Yaar Khan died remembering Guru Ji every moment of his life.

While describing the importance of the land of Chamkaur, Allah Yaar Khan Jogi penned these immortal lines in his account:

It is written on the Portico of Gurudwara Katal Garh Sahib, Chamkaur Sahib. He further extols the importance of Chamkaur, in another couplet :-

(When Ram was given exile his wife Sita was with him)

(Hindustan which claims to be the oldest civilazation in this world, her mother was with him)

The poet actually is saying that what was this exile if compared to the king of kings Guru gobind singh ji’s life, the tenth master cared for humanity not his family, friends or peers, his whole life was an exile starting from the age of 9 when he himself sacrificed his father by saying that who else can save Hindu(ism).

Here the poet is referring to the tenth master Guru gobind singh ji,in machiwara where he was all by himself after sacrificing his sons,while the poet points that ram(lord rama or god) wept when laxman lost consciousness and regained consciousness after hanuman brought sanjiwani butti, while my satguru the tenth master in machiwara when he lost everything : his anandpur,his family including his 4 sons(sahebzadaas), his mother mata gujri ji, his army, and barefooted rendered friendless and helpless he never lost courage. In the jungles of Machhiwara, barefoot and hungry, he remained firm and sang a merry song: he is not even complaining but saying:

"O give Him this news of me,

Without You O Lord, the luxury of soft beds is full of pain and discomfort, Pleasures of palaces are like living among snakes, The thorns that ***** my feet are now my flask for drink. The dagger that is pursuing me is my cup, O Lord. Without Thy grace O Lord, comforts are nothing but a butcher's knife. The bed on the ground is heaven to me, Lord, if Thou art with me,

Burnt be the rich dwellings. they are hell to me if I forget Thee."

Khalsa mero bhavan bhand-aa-raa, Khalse kar mero satk-aa-raa.
I dwell in the khalsa who is a storehouse of all my requirements. I am honoured because of the khalsa.

Upmaa khalsae jaath na kahi, Jihv-aa ek paar nah lahi.
Eulogy of the khalsa is beyond me. I cannot fathom full praise of the khalsa with one tongue.

Ya mai ranch na mithe-aa bhaakh-ee, Paarbrahm gur Nanak saak-ee.
I certify that I have not mis-stated anything in the foregoing. God & Guru Nanak are my witnesses to endorse the foregoing truth

(Krishan - the Hindu deity, made brothers fight with brothers, i.e Kaurava and Pandavas by giving discourse of Geeta)

While Guru gobind singh ji said “main hoon param purakh ko dasa dekhan aayo jagat tamasha” , “mau ko parmeswar jo uchare te sab narak kund main jaaye” "Those who call me God, will fall into the deep pit of hell. Regard me as one of his slaves and have no doubt whatever about it. I am a servant of the Supreme Being; and have come to behold the wonderful drama of life." He led by example, sacrificed his father(hind ki chadar Guru tegh bahadur saheb ji), his four sons, his anandpur, everything he had)

I have never seen such rare deeds done out of love (about Guru ji sacrificing His everything), What to say of seeing, I haven't even heard about them ever!

I talk about neither yesterday nor tomorrow; I talk about today. Had there been no Gobind Singh, All would be under Islamic sway.(circumcised)