When Sikhs captured the Red Fort 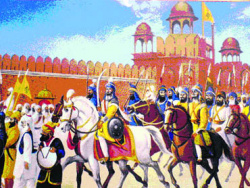 When the Sikhs surrounded the fort, the Emperor and his guards hid themselves

The Sikhs attacked the Red Fort on March 11,1783, and hoisted the Nishan Sahib. The Emperor offered a treaty, and accepted their terms, writes Major-Gen Kulwant Singh (retd)

Sikhs emerged as a strong and powerful force

NADIR Shah’s brutal offensives and eight invasions by Ahmed Shah Abdali had made the Mughal Empire fragile and weak. Sikhs had emerged as a strong and powerful force in northern India. The Sikhs eventually halted Abdali’s invasions. Under the leadership of Dal Khalsa chief Sardar Jassa Singh Ahluwalia, the Sikhs refused an alliance, and instead challenged Abdali for battle. They were anxious to avenge the killing of over 20,000 Sikhs, mostly women, children and old people, and also destruction and desecration of the Golden Temple. Sensing defeat, Abdali called it a day, and finally returned to Afghanistan, never to come back again. The vast area of the Indian subcontinent lying between the Indus and the Yamuna was free from foreign rule.

With no enemy in the North, and Shah Alam II at the head of the decaying Mughal Empire at Delhi, the powerful 12 misals had a free run in increasing their influence in all directions, from the Indus to the Yamuna, seeking rakhi (protection money) from various small chiefs, nawabs and rajas.

The Marathas were marginalised

The Marathas, after their defeat by Abdali in the third battle of Panipat in 1761, were marginalised, and the Rohillas were a spent force. The English were in the process of finding their place at Delhi. It was easy for the Sikh misals to cross the Yamuna and make forays towards Delhi and beyond. The misals did not owe any allegiance to each other, except when the Sarbat Khalsa, through a Gurmatta, resolved to attack a common target. Baghel Singh’s Karor Singhia Misal was operating in south-east Punjab. He was a very able leader of men, a good political negotiator, and was able to win over many adversaries to his side. The Mughals, the Marathas, the Rohillas, the Jats and the British sought his friendship, and, above all, he was a devout Sikh; amrit prachar was his passion.

Karor Singhia was one of the strongest misals with 12,000 well- trained horsemen. The combined strength under Baghel Singh, including soldiers of a few sardars who joined him, was well over 40,000. He captured territories much beyond Delhi to include Meerut, Khurja, Aligarh,Tundla, Shikhohabad, Farrukhabad, Agra and many other rich townships around Delhi, and collected tributes and rakhi from nawabs and rajas. He captured Saharanpur and overran the Rohilla territory in April 1775. In March 1776, Baghel Singh’s forces gave a crushing defeat to the Mughal army near Muzaffarnagar; thus Sikhs extended their influence on the whole of the Yamuna-Gangetic doab.

Baghel Singh invaded Delhi on January 8, 1774, and captured the area up to Shahdara. The second invasion was on July 17, 1775, when the Sikhs captured the area around the present-day Pahar Ganj and Jai Singhpura. Bulk of the fighting took place where present-day New Delhi is located. Sikhs temporarily withdrew due to shortage of supplies, but they kept the agenda of the Red Fort alive, and continued domination and intrusions into the Emperor’s territory surrounding Delhi.

By early 1783, the Sikhs commenced preparations for the capture of the Red Fort. A force of 60,000 under the leadership of Sardar Jassa Singh Ahluwalia and Sardar Baghel Singh assembled at Ghaziabad, continuing their attacks and capturing rich towns around Delhi. Enormous booty was collected by Sikhs, which was sent to Punjab with an escort of 20,000 soldiers. One-tenth of this booty was sent to the Golden Temple as offering to the Guru.

On March 8 the Sikhs captured Malka Ganj and Sabzi Mandi. Prince Mirza Shikoh, on orders from the Emperor, tried to stop the invaders but suffered defeat, and fled. On March 9 they captured Ajmeri Gate. There was a panic in the city; many took shelter in the fort. Jassa Singh Ramgarhia joined the Sikh forces at the last moment with 10,000 soldiers. As many as 30,000 Sikh horsemen of Baghel Singh’s army were camping at a place now known as Tees Hazari, location of the Delhi High Court.

The Sikhs attacked the Red Fort on March 11,1783. The Emperor and all his guards, in fact every one in the fort, hid themselves. The story goes that an insider informed Sikhs of a weak spot in the wall of the fort, where the soldiers made a hole by ramming it with wooden logs; the place is named as Mori Gate, the location of Inter State Bus terminus (ISBT).

The Sikh conquered the Red Fort, but they missed a great opportunity and failed to exploit the advantage of being the strongest force.