Bhai Esher Singh has led various humanitarian teams both to Tsunami affected regions in Campbell Bay and in the earthquake torn regions of Kashmir. He was instrumental in helping UNITED SIKHS set up a community center in Poonch, Kashmir and in Campbell Bay that continues to provide assistance to affected victims.

The below incident has been narrated as per his own eyes. Approaching Gha Mandi, he parked his car to speak on the phone, discussing the day’s plans with UNITED SIKHS officer, he said, “I noticed a girl being followed by 2 clean shaven men. The men were eve-teasing her, which raised my eyebrows. In a few minutes, I saw a Maruti van, plate number number PB 02E 6158 heading towards the girl”. The door of the van opened and a few hands pulled the girl towards the van in an effort to kidnap her. 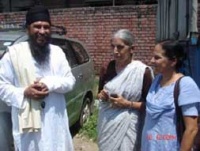 The girl was trying to push herself away from their hands. The two men, who were following the girl, picked her up and pushed her towards the car. The girl was shouting for help but no one came forward to rescue her”. Bhai Sahib followed their van in his car and parked his car in front of their van after a chase. A dialogue interrupted between the driver and Bhai Sahib where the clean-shaven driver began hurling abuses at him. The driver in the meantime put his car in the reverse gear and started to pull the car backwards, which hit a divider and couldn’t go further.

As per Bhai Sahib’s recollection, around 6 to 7 clean-shaven men came out of the van through the windows as the doors of the van got jammed when the van hit the road divider. The driver of the car grappled with Bhai Sahib and in the meantime the others pounced on him. The roadside watchers were merely watching the show in speculation and no one called for the police. One of the persons in the mob hit Bhai Sahib on his wrist with an iron rod which he took out from the van. Bhai Sahib blocked the second attack of the rod with his leg, the effect of which made the attacker to drop the rod. As he was grappling with the other four, another person picked the rod and hit Bhai Sahib on his head. This hit him hard on his neck and the head, causing a dizzy feeling. Coming out of shock from the hit, Bhai Sahib moved backwards and pushed the man who hit him with the rod. The rod fell and Bhai Sahib moved forward and picked up the rod and used it as a Gatka stick, being an expert in Gatka and having being an organizer of the Gatka Yudh Smagams in India, wielded the rod with full strength and uttered a Jaikara. Seeing this the 6 to 7 men ran away. Bhai Sahib requested the girl to move towards his car.

Bhai Sahib described the girl coming from a Sikh family and an engineer from Delhi, crying with pain and whose clothes were torn. Her forehead was bleeding and her cheeks had blood oozing out from bite marks. Her salwar was torn and her clothes were in bad shape. He gave her his shawl and asked her to sit in his car. 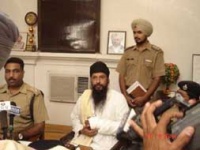 Bhai Esher Singh in the police station with SSP Srivastava

The girl’s particulars are with UNITED SIKHS and will be kept confidential for security reasons and as advised by the police authorities. Bhai Sahib took the girl towards the Kotwali on Uccha Pull where he informed constable Gurdip Singh who was on duty of the incident and asked them to visit the location.

Bhai Sahib dropped the victim at the police station Kotwali at Phuware Vaala Chownk and came back to the site where he was informed by the constable Gurdip Singh that the kidnappers had come back and taken away the car. The girl had indicated to Bhai Sahib that she didn’t have faith in the system and would shortly return with her family members to identify the kidnappers with Bhai Sahib’s help.

In an interview when asked about what inspired him to take the action, he said, it is a duty of every Sikh to stand up for justice and human rights. He quoted a Gurbani verse as his inspiration, which is from Ang 518 of the eternal Guru of the Sikhs, the Guru Granth Sahib Ji:

The injuries from the scuffle having taken a toll, the police took Bhai Eshar Singh to the civil hospital. Bhai Sahib waited for more than 30 minutes but no doctor was available to check his injuries. Bhai Sahib then called Advocate Jaswinder Singh, SGPC member and coordinator of Akaal Purakh Ki Fauj, who made arrangements for him to come to the SGPC run Sri Guru Ramdas Charitable Hospital Trust, Amritsar. There, he was visited by SGPC members. The Sub Divisional Magistrate Manpreet Singh also came over to thank him. 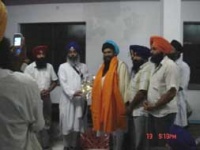 We are thankful to the Sri Guru Ramdas Charitable Hospitable Trust doctors, who have provided overwhelming medical assistance and attended to Bhai Sahib’s every need. A number of organizations have contacted Bhai Sahib for awards.

UNITED SIKHS have been queried to setup Global Humanitarian TaskForce.